It is always fun to read the commentaries on the weekly Torah portions published by the leftist “Rabbis for Human Rights” to see how they twist the Torah for their own purposes. 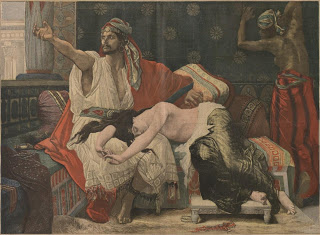 This week’s commentary by anti-Israel tour guide Tamar Avraham has a parenthetical comment about an episode in last week’s parasha:

Dina’s attempt to get close to the young women of the land failed in the light of her brothers’ refusal to agree to “mixed marriages.” (It is not here the place to expand on the thought that it is reasonable to assume that there had been a real romantic connection between her and Shechem and that the story of rape was added later to modify the seriousness of the massacre that Jacob’s sons had perpetrated on the residents of Nablus).

Was Dina raped or was she in love with Shechem?

The text in Genesis 34 says, in JPS translation, “And Dinah the daughter of Leah, whom she had borne unto Jacob, went out to see the daughters of the land. And Shechem the son of Hamor the Hivite, the prince of the land, saw her; and he took her, and lay with her, and humbled her.”

The word that is translated as “humbled” has many other translations as well. But the same root word is used to refer to rape without question in Judges 20:5.

Even if the word וַיְעַנֶּהָ doesn’t literally mean rape, it means something like to humiliate. Targum Yonatan translates it to Aramaic as  וְסַגְפָהּ, which means to afflict or cause to suffer.

Realistically speaking, it seems very unlikely that Dinah could meet a powerful prince, fall in love and sleep with him in a single day. As the Torah makes clear with the episodes of Pharaoh and Abimelech, rulers routinely would forcibly take women as they pleased. It is unlikely that Tamar would be unaware of this pattern of how women were treated by foreign rulers.

Why would Rabbis for Human Rights want to minimize a rape? That isn’t what you would expect human rights campaigners to do.

But, of course, Dinah represents Jews, and Shechem represents “Palestinians” (note how the writer says Shechem lives in Nablus, a name that was not to exist for centuries afterwards – the city was originally named after Shechem himself.) Therefore, the story cannot be of natives attacking a Jewess, but of Dinah’s Israelite brothers slaughtering the residents of the town for no reason. Dinah cannot be a victim, because it would violate the anti-Israel narrative that “Rabbis for Human Rights” wants to promulgate.

Which brings up something about honor.

When an Arab or Muslim woman gets raped, to regain the family honor, either she is killed herself or she is forced to marry her rapist and pretend that her attacker is really a lover.  Rabbis for Human Rights seems to agree with this solution in Dinah’s case- it restores her honor.

But Dinah’s brothers also acted out of honor. Instead of blaming their sister and rewarding the rapist, they attacked the rapist and saved their sister.

And we see which side Rabbis for Human Rights is on.