Rabbis for Human Rights’ Amy Klein wrote a commentary on last week’s Torah portion, Chayei Sarah, which she felt was very important because it describes how Abraham bought the Tomb of the Patriarchs and RHR wants to ensure that Jews have no rights to the place that Abraham, Isaac, Jacob and their wives are buried.

I was struck by this part of Klein’s description of the story of Abraham:


There are those who believe that the story of Abraham’s purchase of the Cave of Mahpelah established eternal rights to the land of Israel. … Limiting the interpretation of the text to a record of land deeds strips the text of its heart. It is a text of human and social complexity. It is a story that brings to a close two overlapping triangles of tragedy: Abraham – Isaac – Ishmael and Abraham – Sarah – Hagar. Their tragedy is personal and national. It is the cruelty endured by Hagar at the hands of Sarah with Abraham’s acquiescence and the banishment of Hagar and Ishmael and with them, any threat to Isaac’s inheritance.

Is that how she reads the story of Hagar’s banishment?

Because the actual text (Genesis 21) shows that Abraham was reluctant to send off his son with Hagar – until God told him to listen to Sarah, assuring him that Ishmael will grow into a great nation:


9 And Sarah saw the son of Hagar the Egyptian, whom she had borne unto Abraham, making sport.
10 Wherefore she said unto Abraham: ‘Cast out this bondwoman and her son; for the son of this bondwoman shall not be heir with my son, even with Isaac.’
11 And the thing was very grievous in Abraham’s sight on account of his son.
12 And G-d said unto Abraham: ‘Let it not be grievous in thy sight because of the lad, and because of thy bondwoman; in all that Sarah saith unto thee, hearken unto her voice; for in Isaac shall seed be called to thee.
13 And also of the son of the bondwoman will I make a nation, because he is thy seed.’
14 And Abraham arose up early in the morning, and took bread and a bottle of water, and gave it unto Hagar, putting it on her shoulder, and the child, and sent her away; and she departed, and strayed in the wilderness of Beer-sheba.
15 And the water in the bottle was spent, and she cast the child under one of the shrubs.
16 And she went, and sat her down over against him a good way off, as it were a bow-shot; for she said: ‘Let me not look upon the death of the child.’ And she sat over against him, and lifted up her voice, and wept.
17 And G-d heard the voice of the lad; and the angel of G-d called to Hagar out of heaven, and said unto her: ‘What aileth thee, Hagar? fear not; for G-d hath heard the voice of the lad where he is.
18 Arise, lift up the lad, and hold him fast by thy hand; for I will make him a great nation.’
19 And G-d opened her eyes, and she saw a well of water; and she went, and filled the bottle with water, and gave the lad drink. 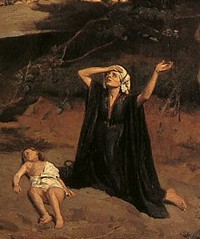 Sarah was protecting her son from the influences of Ishmael, who was tormenting Isaac, a toddler.

Abraham loved Ishmael, and didn’t want to send him away – but God told Abraham that Sarah was right.

Hagar threw her son under a shrub and left him to die alone. She didn’t pray for him. She didn’t comfort him. She simply felt sorry for herself at the possibility of watching him die, so she abandoned him.

This is not the first example of Hagar’s cruelty. Sarah, selflessly, gave Hagar to Abraham as a wife when she couldn’t have any children. Hagar repaid her kindness by despising Sarah and mocking her (Gen. 16) Sarah knew exactly what Hagar and Ishmael were like and she did not want these selfish, cruel people in her household while she was raising the most important person in the world, based on God’s promise to Abraham.

Is there a better analogy between Sarah and Israel, and Hagar and the Palestinians? Sarah is willing to do whatever it takes to protect her family and her people’s future, beyond even Abraham’s wishes. Her motherly instinct is vindicated over Abraham’s legendary kindness – God tells Abraham that too much kindness can endanger his own future.

Hagar cares only about herself, not caring who gets hurt along the way and not even lifting a finger to help her own son, whose impending death is an inconvenience to her.

But Rabbi Klein doesn’t call Hagar cruel. Oh, no – that would be Arabophobic. Klein thinks Sarah is the cruel one, for not wanting her son to be influenced by a mother who cares so little for her own son, and who treated her like dirt. It is Sarah’s love and protection for her miraculously-born child that Amy Klein considers cruel, while the truly odious Hagar – whose evil personality was already clear to Sarah some 15 years prior – is considered the victim.

Which is exactly consistent with how “Rabbis for Human Rights” views the Israel-Arab conflict, today.