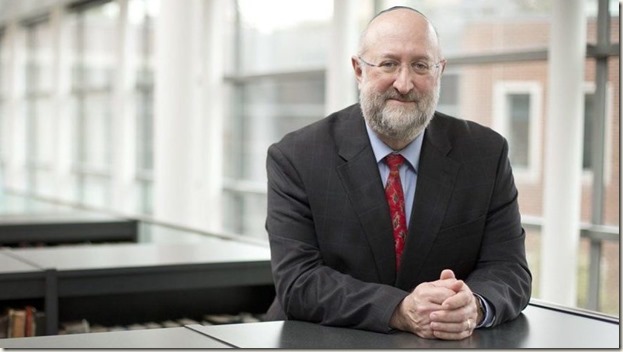 Last fall, Berkeley’s Graduate Theological Union made history by inaugurating its first non-Christian president — an Orthodox-trained rabbi — to lead the esteemed consortium for the advanced study of religion.

“I am here because nearly 30 years ago my passion was ignited for interreligious learning,” he said, describing efforts at Hebrew College to broaden the Boston Theological Institute into an interfaith body. “One of my top priorities as president is to continue to build a GTU culture in which every voice is valued and respected — an environment where trust and open inquiry allows us to introduce differing points of view.”

The city of Berkeley issued a proclamation celebrating the occasion. A school newsletter called it “a night to remember” and said that Lehmann’s address “captured the spirit of the evening.” It formally marked “a new era” for the GTU.

But only four months later, and just a year and a half after his hire, Lehmann would quietly resign amid sharp public attacks for his pro-Israel views.

The story is unbelievable – and all too believable. Alison Weir, who the ADL has associated with antisemitism, wrote an article attacking Rabbi Lehmann because he is a Zionist.

Though influential in anti-Israel circles, Weir has been accused of animosity toward the Jewish state and antisemitism, including by the Anti-Defamation League. In a 10-page report, the ADL describes Weir as someone who “employs anti-Semitic imagery” and portrays “Israel and its agents as ruthless forces that control American policy.” The report cites instances of failing to condemn acts of terrorism by Palestinians, comparing Israel to Nazi Germany, and trafficking in a blood-libel conspiracy related to Israeli organ harvesting.

Weir has had troubling associations. Her message has appeared in “The Final Call,” a publication of the Nation of Islam, according to the ADL; she was photographed with Ashahed Muhammad of the NOI at an American Muslims for Palestine event. Muhammed is the author of the book “The Synagogue of Satan.”

In 2010, Weir was a guest on the talk radio show of Clay Douglas, a conspiracy theorist from New Mexico associated with the antisemitic “Christian Identity Theology” movement, which considers Jews to be satanic, according to the Southern Poverty Law Center. Douglas has published antisemitic screeds, according to the SPLC, questioning, for example, whether Jews are “behind the destruction of America.”

Jewish Voice for Peace, an anti-Zionist organization accustomed to working with some of Israel’s sharpest critics, has disavowed Weir, calling her behavior on Douglas’ radio show “repugnant.”

This article written by the bigot Alison Weir was distributed at Rabbi Lehmann’s inauguration.

Soon afterwards, an open letter was written by many Christians associated with GTU slandering Rabbi Lehmann with bald-faced lies:

In 2019 we hosted two GTU-wide Kairos Palestine events. Attendees were invited to hear and understand Palestinian voices in the Kairos Palestine document. In planning the December event we learned of considerable concern over the appointment of Rabbi Daniel Lehmann as president, a self-described Zionist who openly expressed Islamophobic and racist anti-Palestinian views1

Here is the article they link to, from Middle East Forum, that supposedly proves Rabbi Lehmann’s supposedly toxic views. It has not one word that can remotely be considered anti-Palestinian, racist  or Islamophobic.

The entire anti-Lehmann campaign was based on lies – lies that were eagerly signed off by nearly 100 GTU affiliated members, almost all of whom are Christian clergy.

Not to mention that Kairos Palestine is an unquestionably antisemitic movement.

This is not just anti-Zionism. This is theological Jew-hatred that hearkens back to the long history of official Church antisemitism. These same people would have hated a Jew being president of GTU anyway, and his proud support of Israel gave them the excuse to slanderously paint him as an Islamophobe and a racist.

This is modern Christian antisemitism that lives comfortably within the “social justice” movement that pretends so much to be anti-racist and liberal. It is none of these.

GTU, for its part, is not defending Rabbi Lehmann, not speaking out against its members that seemingly forced him out, and it still pretends to be interested in unity and diversity of views. It had a chance to vocally speak out against modern antisemitism that masquerades as “wokeness” – and it consciously decided not to.

This is what modern antisemitism looks like. And it is just as ugly as all the previous versions.