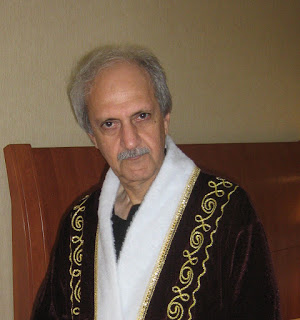 Dossa defended his attendance, and the conference, by stating that only 6 of the 33 papers given at the conference explicitly denied the Holocaust. Otherwise, he says, it was a very serious conference.

In 2012, he wrote a paper he named “Auschwitz’s Finale: racism and holocausts” where his abstract is filled with straw man arguments: “This article dissects the Auschwitz discourse and its denial of other holocausts. It critiques the claim that it was the only ‘real’ genocide. It advances a contrary thesis on colonialism, racism and holocausts in history. I clarify the affinity between colonialism and fascism and Israeli tactics in Occupied Palestine. It is undeniable that Auschwitz fuels anti-Arab anti-Semitism and anti-Islamism. “

The ‘uniqueness’ of the Holocaust flows from Ashkenazi pride in their racial superiority. Its corollary is not denied but defended: non-Jews count for very little, which can be traced back to the Old Testament thesis on the acceptability of the Canaanite genocide because Yahweh willed it. Israel’s killing of Palestinians, Arabs and Muslims since its founding has been similarly justified. Suffice it to mention the 1200 civilians killed in Lebanon in July 2006 and the 1400 civilians (including 400 children) killed in Gaza in January 2009. It is evident that the chosen Jew–unchosen non-Jew divide has been globalised. It is even accepted by many ‘Third world’elites, including Saudi, Jordanian and UAE Arab leaders who endorse the US–Israeli agenda without demurral. Its legitimacy, its ‘truth’ has long been settled. The dissenters among Jews are aberrations.

Dossa has a bit of an obsession with Ashkenazic Jews, whom he usually defines as “white Jews.” In a footnote he blames a researcher’s racism on his being an Ashkenazic Jew. “Lemkin held a racist view of Africans; he labelled them ‘savages’ and ‘cannibals’ and even blamed them for killing fellow Africans on the orders of their Belgian masters. It testifies to the resilience of chauvinism in Ashkenazi culture that a man like Lemkin could succumb to its vile charms.”

This is an academic, today.

It is curious that when Professor Jason Hill writes an article that is pro-Israel, his faculty coworkers censure him, but no one at St. Francis Xavier University says a word condemning Shiraz Dossa for his naked Jew-hatred masquerading as scholarship.