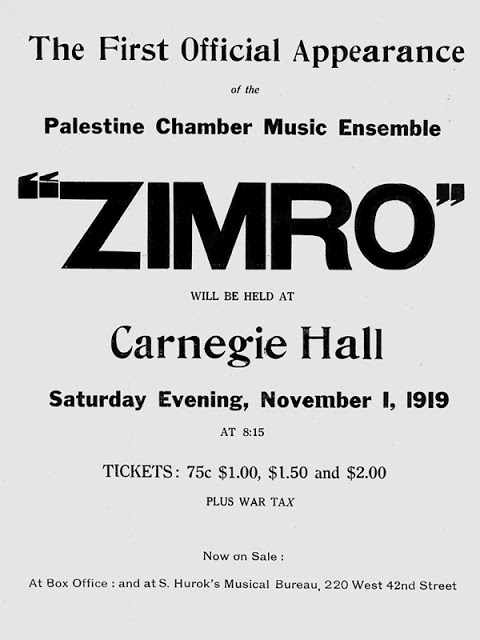 From The Boston Globe:

Sunday, Dec. 11, the Boston Chamber Symphony inaugurates a residency at Brookline’s Temple Ohabei Shalom with a program including Sergei Prokofiev’s “Overture on Hebrew Themes.” It was composed in 1919, while Prokofiev was living in New York City, but commissioned by colleagues from St. Petersburg who had formed a sextet — clarinet, string quartet, and piano — called the Zimro Ensemble. Dedicated to Zionism, Zimro performed Jewish-themed repertoire and raised funds for a proposed “Temple of Art” in Palestine. The group left St. Petersburg in 1918, touring Siberia, the East Indies, and Japan before coming to America. Clarinetist Simeon Bellison asked Prokofiev for a piece to anchor Zimro’s Carnegie Hall debut, providing the composer with a number of musical themes (which, in fact, Bellison may well have written himself). Prokofiev played the piano at the premiere.

…Prokofiev, though, left America, eventually returning to the Soviet Union. He sometimes dismissed his Zionist overture (the work’s almost relentless parade of four-bar phrasing struck him, in retrospect, as graceless) but nevertheless orchestrated it in 1934. Largely, Prokofiev remembered, while sitting in artist Pyotr Konchalovsky’s garden, having his portrait painted. “How are the Jews coming along?” Konchalovsky would ask, before suddenly, brusquely instructing the composer not to move.

Most online versions of the overture are from the original 1919 version, but here is one of the rarer orchestral versions:

As this site notes:


The Overture on Hebrew Themes was the first work to witness Prokofiev’s unexpected interest in Jewish music. It was also the first independent work (excluding arrangements) written by him in the United States. And Prokofiev was the first known Russian composer to base a Jewish score not on Jewish liturgical chants, but on klezmer tunes.(11) The history of this work is described in detail in his autobiography:


In the fall of 1919 the Jewish “Zimro” ensemble came to America. It consisted of a string quartet, clarinet, and piano, all of them fellow students of mine at the Petersburg conservatoire. The official purpose of their concert tour was to raise funds for a conservatoire in Jerusalem. But this was merely to impress the Jewish population of America. Actually they barely made enough to keep themselves alive. They had a repertoire of rather interesting Jewish music for diverse combinations of instruments: for two violins, trio, etc. They asked me to write an overture for a sextet, and gave me a notebook of Jewish themes. I refused at first on the grounds that I used only my own musical material. The notebook, however, remained with me, and glancing through it one evening I chose a few pleasant themes and began to improvise at the piano. I soon noticed that several well-knit passages were emerging. I spent the next day working on the themes and by evening had the overture ready. (12)

There is much more at that link about Prokofiev and his relationship with Jews. 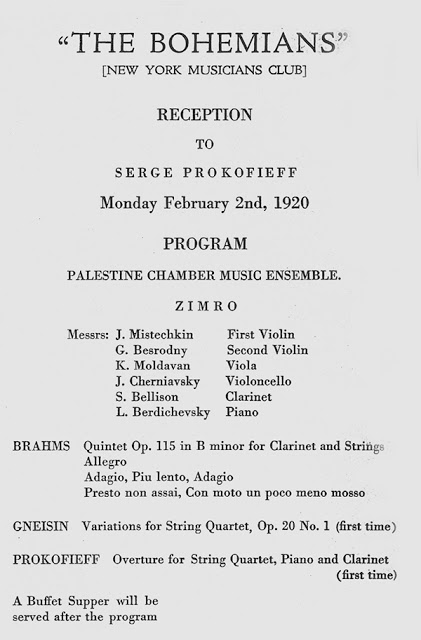