Take out the violins.

Palestinian solidarity activists in North America are accustomed to being abandoned by many of their “progressive allies”, be it church officials or municipal councils or politicians. This is the sad reality of working in today’s political landscape, where opportunism runs rampant and the pro-Israel lobby has often succeeded in dominating the agenda with its relentless smear and intimidation campaigns. But the cut runs deeper and is profoundly more devastating when it is a long-time genuine ally that enables the Zionist settler colonialist narrative; such is the case with the recent visit of a Jewish National Fund (KKL-JNF) delegation to Cuba and their presentation at a climate conference in Havana. A visit that besmirches the long history of joint struggle and solidarity between the Cuban and Palestinian peoples.

It is funny that the only place to find good news about Israel is in a virulently anti-Israel publication. As the good guys despair over the gains that seem to be made by the Israel haters, the haters are despairing more over how they have lost their previously-reliable allies! 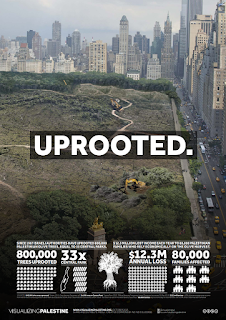 It links to the poster shown here from Visualizing Palestine. VP gives two sources for the statistic that Israel uprooted 800,000 olive trees in one of its well-designed and completely lying infographics.  One is Oxfam, which mentions it in a fact-sheet yet gives no source. The other is an OCHA UN document, “Olive Harvest Factsheet 2011,” which doesn’t say what they claim it says. Neither does the 2012 document, the last time it was issued.

It is a made-up statistic.

Just as with the prison lie which gets accepted as truth in the UN, the olive tree statistic has been repeated by others as fact.

Without any actual studies to document the number, the 800,000 figure has to be considered a lie.