Here is one of the postponed/canceled events for “Israel Apartheid Week” at Lancaster University: 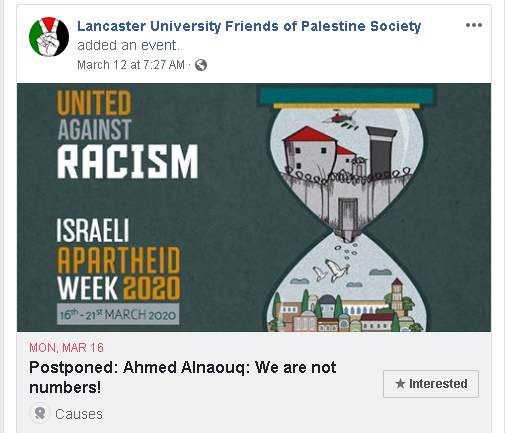 Notice that the theme of the event was supposed to be “United Against Racism.”

Which is funny, because the intended speaker has written about racism – Arab racism against black Palestinians.

On his Facebook page, in Arabic, he wrote last month:

About three years ago, I read an article in the Al Monitor newspaper titled “Black Palestinians Shrug Off Racism“… After I read the article, I was angered, thinking “What?! We don’t have racism in Gaza!” So I decided to write an article that would refute the original article. Then I began to conduct interviews with some dark-skinned youth, and I was shocked to find that yes, indeed, we do have despicable racism in Gaza, and dark-skinned people suffer because of our racism.

After I published the article, I was surprised to see that it reached the (Ministry of) Interior, and the criticism began to pour down on me, as well as accusation of being a traitor, and (people said that) I am trying to distort Gaza’s image… And no one thought or felt even once what the wronged people (i.e. the black Palestinians) feel because of our racism.

The Israel haters say they are against racism, yet they know quite well that Arabs are racists – but that fact cannot be publicized because anyone who is brave enough to say a word is threatened by the Hamas or PA governments!
In fact, Palestinians learn when they are young that they are not allowed to criticize their own people or government at the risk of imprisonment and social stigma. The only people who can be insulted are Israelis and whatever Arab nations that seem to be aligned with Israel.
A society that cannot handle criticism can never grow. The Israel haters are doing their Palestinian pets no service when they censor any criticism of them – censorship that in the past has extended so far as to hush up stories of Western female “peace activists” being raped by Palestinians.