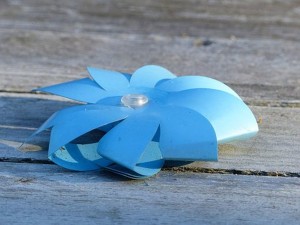 Jerusalem, July 4 –  A nursery school educator in the Nahalat Ahim neighborhood of the capital faces disciplinary action this week following a period in which she failed to send the children home with the mandated minimum quantity of kitsch, crafts, and assorted other debris, Ministry of Education sources reported today.
Ministry spokeswoman Inda Boydem told reporters that the teacher, whose name has not been released, missed the monthly average of six kilograms of trash in the guise of crafts and souvenirs that preschool teachers must by law distribute each month to each child to take home. Upon end-of-year review, noted Ms. Boydem, the educator in question was discovered to have met the six-kilo threshold only three times, and failing to crack even the four-kilo mark in April.
“This is a rare instance of consistent failure that we will address in no uncertain terms,” she promised. “The guidelines on this matter have never been clearer: each child registered for the preschool for ages three and four must be given no less than six kilos per month of drawings, collages, finger paintings, pinwheels, birthday surprises, ugly picture frames, flags, and other bric-a-brack. Unless those quotas are met, parents will be confronted with the prospect of having usable space in their homes, and that would be a disaster.”
Ministry Superintendent for Preschool Education Onda Frijj explained the importance of the materials. “The Ministry of Education has several primary purposes, one of which has always been inconveniencing Israeli families,” she commented. “In extreme cases that involves having nationwide strikes so parents must scramble to find arrangements for their school-aged children, but the everyday fulfillment of that purpose attracts far less media attention. From keeping school hours that force parents to miss work to pick up and care for their children in the afternoon, to a system that seldom gets into gear before two months into the school year, to making sure parents must find a place for tons of crap their kids have ‘made’ or received at some party, lest junior throw a tantrum at seeing the crap chucked in the garbage, there are countless daily inconveniences  our educators must foist on parents, and adherence to the mandated minimums is what ensures the foisting remains at appropriate levels.”
Ms. Frijj observed that the low April figure also stems from the two weeks each year schools are closed for the seven-day Passover break, but that in general, teachers generally make up for those lost weeks by doubling or tripling the quantity of crap sent home in the two weeks preceding the Passover break.