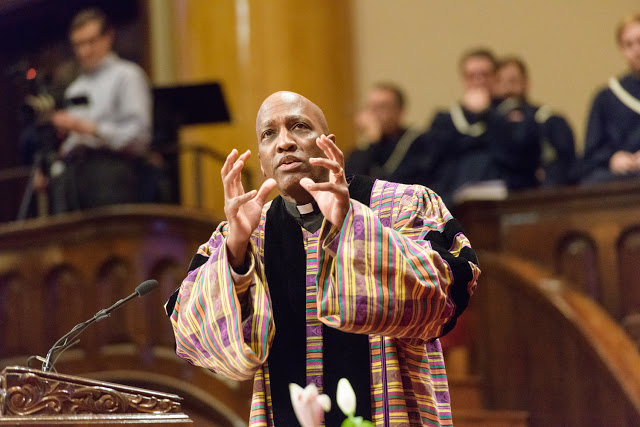 We’ve seen the rabid Israel hatred and antisemitism of the Presbyterian Church USA in the past. (Even liberal and progressive Jews have found that PCUSA statements crossed the line into antisemitism.)

The Stated Clerk of the General Assembly of the Presbyterian Church (U.S.A.), Reverend Dr. J. Herbert Nelson II, issued a statement against the Trump plan that goes way beyond valid criticism into antisemitism territory.

We must speak out on behalf of the Palestinian community, residents of this land for generations. Their land has been stolen. Their holy sites have been denigrated. Their homes and businesses have been destroyed and they all live under the iron fist of Israel’s continuing military occupation. This would not change under this “deal” proposed. As Christians, concerned for our own roots in this “Holy Land,” we cry out in anguish and anger as a kind of social and religious “ethnic cleansing” is occurring under these efforts of current Israeli leadership and of our own president.

What Muslim or Christian religious rights have been curtailed by Israel? On the contrary, if the Muslims controlled the land the way that PCUSA insists, the Jewish rights to worship would be the ones that are denigrated.  There is more freedom of religion in the Land of Israel now under Jewish rule than there has been for 1900 years under Christian and Muslim rule. That isn’t even in question.

But the statement gets even worse;


One of the deep ironies of the impact of the ongoing illegal taking of Palestinian land and the draconian control on the Palestinian community by Israel and its military is the potential for feeding the growing antisemitism in Europe and the U.S. that we so abhor. More violence is the inevitable fruit of a “deal” such as the one proposed.

This bigoted cleric is saying that Arabs are driven to violence against Jews worldwide and simply cannot stop themselves – meaning they are an inherently violent people. So, just as a pit bull owner is responsible for anyone injured by his pet, Israeli Jews are responsible for any Arabs or Muslims who attack Jews in Europe or America – these subhuman Arabs have no free will and cannot help themselves.

Saying that the Jews defending their people are responsible for haters attacking Jews is supremely antisemitic.

Once Nelson proves his bigotry against Arabs, he must extend it to Jews:


And the Israeli Jewish community should understand, better than anyone, the tragedies of sustained oppression.

This is a thinly veiled accusation that Israeli Jews are acting like Nazis.


I call on all Presbyterians who yearn for peace in The Holy Land to demand of our president a better “deal.” We must make clear to our political leaders that the “land of Israel” will never be at peace until justice is done for all her people, not just members of the Jewish community.

“Justice” is a codeword for allowing Palestinians to reject any and every peace plan they don’t like, because they cannot accept anything that doesn’t fit with “justice” – and they are the only ones who can define what justice entails. PCUSA is saying that the Palestinians have veto power over any peace plan that allows Israel to exist as a Jewish state, which they do not consider “just.”

This statement is not a reasoned criticism of the Peace to Prosperity plan. It is an antisemitic and bigoted screed that uses the plan as an excuse to bash Jews and to say that Jew-hatred is justified.