Showing “balance” by offering honest criticism of Israel, has become a thing. There’s a formula to achieving this balance and it appears to go something like this:
If you say something good about Israel, you must say something good about Arabs
If you say something bad about Arabs, you must say something bad about Israel
If you praise and defend Israel, you must also mention a flaw or two
This dynamic of always aiming for balance speaks to our Western sense of fair play. There is a moral suggestion that a mature person always tries to see both sides of an issue. But the chain of logic only goes so far. There are no two sides to evil. Evil is simply wrong.
To shoot a terrorist in order to stop him from burning down your country, for example, is definitely not the same thing as a terrorist shooting an innocent man. One is the act of a defender. The other the act of an aggressor. Yet you have people who will try to blur the lines and speak of “two deaths” or “two grieving mothers, grieving equally.”
All in the name of fairness and balance.
Omitting the facts of culpability neither brings balance to the equation or brings us closer to peace. That’s because it is neither “fair” nor “balanced” to draw a moral equivalency between Israel and those who seek to destroy her by any means. To do so is to lend legitimacy to terror.
Leaving out a terrorist’s liability is, rather, an example of evil triumphing by good people standing by and doing nothing. In their desire for fairness, these people refuse to characterize evil as such. They won’t choose sides—won’t take a stand for good. They leave things out and blur the facts and in the process, do great damage to Israel.
Being fair to the terrorist out of this Western need for symmetry leads one through a twisted maze of philosophical chicanery, a tautology in which the death of a terrorist and the death of a civilian become one and the same. Death is death. People are people, whether terrorists or innocent civilians.
And once you accept that all death is the same, you are left with a game of chicken. If the soldier won’t put down his gun, there will only be more “death.” And Israel’s only moral responsibility is for its own people, its own soldiers. Therefore, Israel’s role in bringing peace to the region is to lay down its arms—which of course will lead to Israel’s destruction. Because the terrorist sure as heck isn’t going to stop (duh).
But all that matters to these fair and balanced Westerners is that Israel does the “right” thing.
All in the name of that ephemeral thing called “balance.”
Instead of praying to the false god named “Balance” we need to acknowledge that we are not two children squabbling in a Middle East sandbox. That there is a right and a wrong side, a moral choice to be made. To choose balance is to refuse to make that choice. It takes actual guts to speak up for Israel as the entity in the right: the ONLY entity in the right.
The effort to portray Israel in a negative light for the sake of fairness betrays an extreme misapprehension of the facts. There is no “conflict.” Instead, there is a victim (Israel) and a bully (Arab terrorists).
All things considered, the victim has shown great restraint, because the victim desires nothing more than to live in peace, while the bully wants the victim obliterated, gone. And he wants it to HURT.
It does not matter that the victim has statehood and arms, while the bully lives under poverty and a terror regime. The inequity is not about material goods or the political situation. The inequity is about one side acting out violently against the other.
Were your child to be attacked by a bully, you would not say nice things about the bully as you reported the incident to school authorities. You wouldn’t feel a need to couch the report to make it fair and balanced. Your only concern would be to give an accurate accounting of what happened to the proper authorities. Because you know that owning the facts ensures that the matter will be dealt with in a proper manner.
In reporting a bullying incident, you also wouldn’t make excuses for the bully. If Reggie beats up Veronica, it makes no difference that Veronica is wealthy, while Reggie is middle class or perhaps homeless. What matters is that Reggie is beating up Veronica and Veronica deserves our protection and defense.
It is no crime to have money and things. It is a crime to hurt people.
We shouldn’t make excuses for terrorism. We shouldn’t say, “How would you feel if someone occupied your land?”
It really doesn’t matter how someone feels. It doesn’t matter whether someone lives on land you believe to be your own. You don’t have a right to, for instance, blow yourself up in a bus full of innocent people. Or burn down fields with incendiary devices. Or shoot missiles, deliberately targeting children sitting in school buses.
Trying to understand the terrorist in an effort to achieve balance is to support terror, to give it a hand. By the same token, to actively seek out things to say about Israel that portray it in a negative light is to pretend that terror is fair. That terror is a proper response to a societal imbalance. 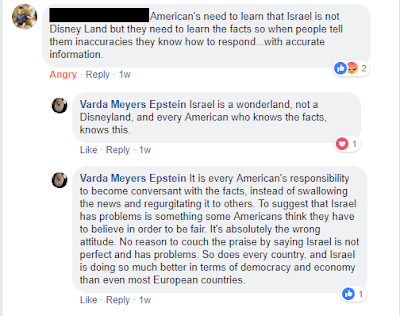 None of this is to say that Israel is perfect, because nothing is perfect: no person and no country. Which makes it irrelevant, a redundancy to say that “Israel is not perfect.”
There is no shame in praise. No shame in choosing sides. No shame in winning.
It does not balance out the scales to mention a victim’s flaws.
So the next time you feel an urge to criticize Israel, stow it.
You’re not doing anyone any favors.
Except the terrorists.