A reporter in Portland’s KOIN News, Jenny Young,  came under fire when she tweeted a very accurate statement. 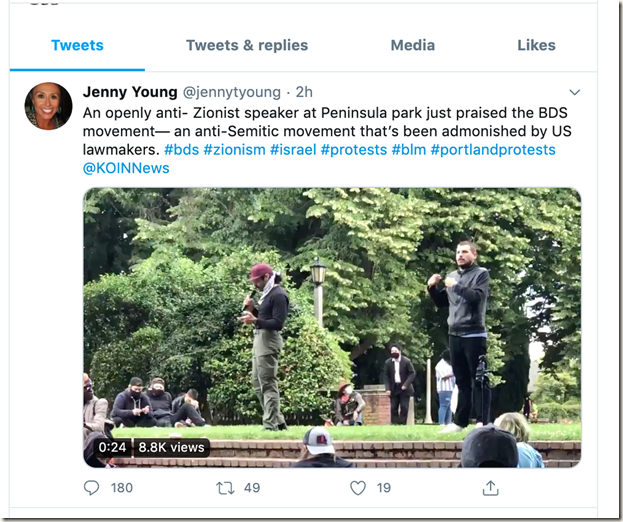 She described a speaker at a “Day of Rage” rally as  “openly anti-Zionist”, and the BDS movement as “an anti-Semitic movement that’s been admonished by U.S. lawmakers.”

All of this is perfectly true.

There was a huge outcry from anti-Israel activists, of course,  and the tweet was taken down after an hour.

All of this is depressingly familiar.

But here’s the part that is really upsetting:

Bob Horenstein, spokesman for the Jewish Federation of Greater Portland, said he felt the reporter’s tweet was an oversimplification of the issue, but said he also took exception with some other organizations’ characterization of the BDS movement. He said the Jewish Federation of Greater Portland had made their stance on the Israeli-Palestinian conflict clear.

“We came out with a statement opposing unilateral annexation of the West Bank. We support a two-state solution,” he said.

He said while the Jewish Federation of Greater Portland doesn’t believe everyone who supports the BDS movement is anti-Semitic, he said many people believe the effects of the BDS movement harm Jewish people.

He also noted that while some local Black Lives Matter chapters have come out in support of the BDS movement, most around the country have not taken a stand on the issue.

The newspaper already had quoted multiple Muslim leaders who all supported BDS and denounced Israel and Zionists. They wanted to hear from the other side for a token comment. And instead of a full-throated expression of support for Israel and against antisemitism and BDS, Mr. Horenstein hedged and dodged and declared how reasonable many Jews are in drawing fine lines between supporting Israel and opposing sovereignty over Judea and Samaria (which the reporter didn’t ask about) and how some people who want to see the Jewish state destroyed are perfectly fine people who aren’t antisemitic at all, oh no, they just want to boycott Jewish businesses and entertainers and academics from Israel while not boycotting Israeli Arab entertainers or businesses or academics.

He doesn’t even know what he is talking about with Black Lives Matter – it is a national BLM decision to support BDS, not local. If Horenstein wanted to make distinctions, he could have distinguished between the Black Lives Matter movement and supporting black lives.

It is possible that the paper selectively quoted Horenstein. He has explicitly called out antisemitism on the Left. But the way that this reads is that both sides are against the decisions of the Israeli government, both sides don’t consider BDS to be antisemitic  – and the Jews are wishy-washy while the Muslims are passionate.

The tweet should have been defended by the Jewish community. BDS has been recognized as antisemitic not only by US lawmakers but by European leaders as well, and it fits the IHRA definition of antisemitism.

Furthermore, Jenny Young should be supported by the Jewish community for what she wrote instead of getting hung out to dry.