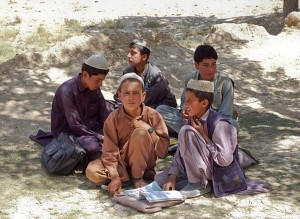 Rome, October 11 – The leader of the Roman Catholic Church will soon take drastic steps to address the sexual abuse scandal plaguing the organization, a spokesman announced today, by moving all those who have engaged in such conduct to a country where indigenous culture condones or encourages it, but Western activists and journalists deem it unworthy of sustained attention.
Father Suipette Underuggi told reporters at a Vatican press conference this afternoon that given the dearth of media and NGO protests against rampant pedophilia in Afghan society, and those groups’ acceptance of the phenomenon as part of the country’s cultural makeup, Pope Francis has decided to move the various clergymen dogged by sexual abuse accusations to the South Asian nation, where they would avoid continued attention to their crimes.
“After extended examination of the available options, the Holy Father has elected to augment the Holy See’s presence in Afghanistan by several hundred personnel,” announced Father Underuggi. “The Holy Father’s chief concern has always been the good name of the Church, and this move, in his divinely-inspired assessment, will go furthest in ensuring that the scandal dies down.”
Father Underuggi pointed to the relative paucity of international organizations denouncing, let alone working to reduce or end, pedophilia in rural Afghanistan. “Even the Western military coalition that operates there is careful not to say or do anything to disrupt it,” he observed. “their considerations, obviously, are not the same as ours, but what the phenomenon demonstrates is that pedophilia in Afghanistan, especially of the men-on-boys variety that has been getting so much negative attention among Roman Catholic clergy, is generally ignored by the West. We can work with that.”
Church officials declined to specify when the program might begin. A Vatican functionary told reporters that numerous bureaucratic and other hurdles remain before the initiative can launch. “For one thing, a robust presence of non-Muslims will hardly be taken lightly there,” admitted the official, speaking on condition of anonymity, given the sensitivity of the issue outside Afghanistan. “But I am sure that with tact and flexibility, we can arrive at a mutual understanding with all the necessary parties.”
Already, a fact-finding mission to the potential destination by two dozen of the affected clergymen is in the works, with participants expected to pay particular attention to the number and ages of people in the tribal areas where they expect to be posted over the long term.