The Western media has been downplaying the meaning of “return” in the weekly Gaza “Great Return March” riots.

But to Palestinian Arabs, the meaning has always been clear. They intend to “return” to take over Jaffa, Haifa, Tiberias and Nazareth more than they want an independent state in the West Bank.

Here is a poster that the PLO – the official representative of the Palestinians to the world – has released for “Nakba Day”: 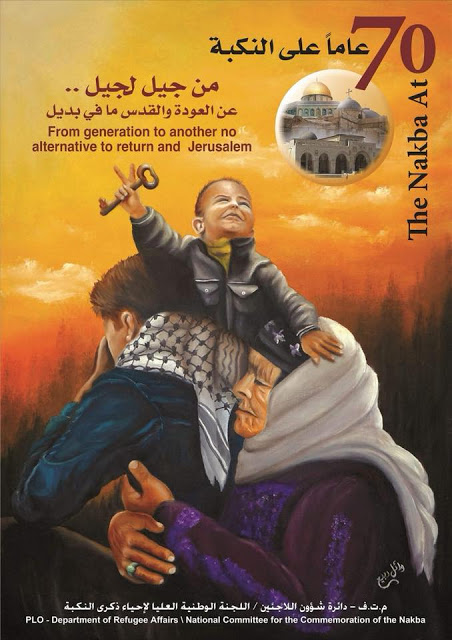 When they say that there is “no alternative to return” they know, and their people know, exactly what that means.
Yasir Arafat said this about “return” in 1980: “Peace for us means the destruction of Israel. We are preparing for an all-out war, a war which will last for generations… We shall not rest until the day when we return to our home, and until we destroy Israel.“
Nothing that the PLO has done since then, including Oslo, has contradicted this basic position. And for proof of that – see what Arafat said after Oslo.
In 1995, in a speech celebrating the birth of his daughter, he said, “The Israelis are mistaken if they think we do not have an alternative to negotiations. By Allah I swear they are wrong. The Palestinian people are prepared to sacrifice until either the last boy and the last girl raise the Palestinian flag over the walls, the churches and the mosques of Jerusalem.”
In 1996, in a speech to Arab diplomats, he said, “The PLO will now concentrate on splitting Israel psychologically into two camps… We plan to eliminate the State of Israel and establish a Palestinian state. We will make life unbearable for Jews by psychological warfare and population explosion. Jews will not want to live among Arabs. I have no use for Jews. They are and remain Jews. We now need all the help we can get from you in our battle for a united Palestine under Arab rule.”
Also in 1996, Arafat is quoted as saying in a speech in Stockholm, “We will not bend or fail until the blood of every last Jew from the youngest child to the oldest elder is spilled to redeem our land!”
The PLO has never, ever repudiated Arafat’s words. On the contrary, it and Abbas has emphasized how they have not changed their position one bit since 1988.
If they wanted to build a country, they would welcome all Palestinians into the areas they control. They wouldn’t want to send them to an enemy country that they teach their children routinely kills them.
But this poster, just like Arafat’s statements, proves that the intent of the Palestinian leadership was never to build a nation but to destroy one.