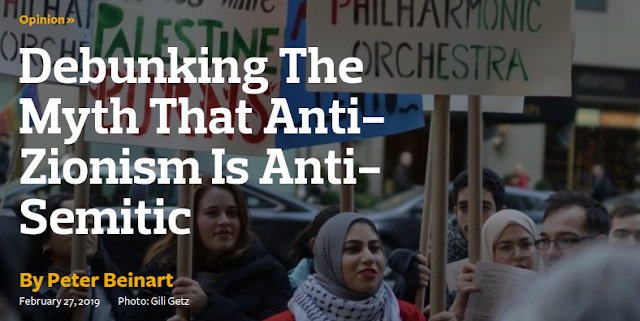 In The Forward (where else?), Peter Beinart offers a defense of anti-Zionism, saying that it is wrong to associate it with antisemitism. “Anti-Zionism is not inherently anti-Semitic — and claiming it is uses Jewish suffering to erase the Palestinian experience,” he claims.

The entire article is an attempt to thread the needle to find boundary cases where it might theoretically be possible to be against Israel but love Jews, or vice versa. Look at Satmar! What about antisemite Richard Spencer who calls himself a “White Zionist”?

The article is sickening and offensive. To understand why, let’s imagine a similar article about racsim in America.

Peter Beinart is the Confederate flag defender of Judaism.

Does knowing that there is a possibility that the offensive acts being done might be innocent make black people feel any better? No, all of those arguments, in the aggregate, are disgusting justifications for racism. And the victims know this very well, despite the theoretical arguments..

When the UN has an obsession with slamming Israel more than any other nation, sure it is possible that it has nothing to do with Jews. When professional academic organizations choose to boycott Israel and only Israel, sure it is possible that they all coincidentally believe that the Jewish state is their highest human rights priority. When artists play in China and Russia and Lebanon without a peep from anyone, but receive death threats for wanting to play in Israel, sure it might be an oversight. And when BDS activists say that everyone should boycott only Jewish bands from Israel and not Arab bands from Israel, or that Jewish owned businesses in Judea and Samaria should be sanctioned but not those owned by Israeli Arabs, or that only Jewish Israelis who move across the Green Line are considered “settlers” but not Israeli Arabs, I suppose maybe someone can come up with some reason why that isn’t antisemitic.

But in the aggregate, it is obvious what the reality is. There are only two possible reasons to explain the obsessiveness that so many have towards Israel – either it is the worst human rights violator on the planet, or the attackers are acting on their latent Jew-hatred and justifying it, just like any bigot justifies their behavior as being righteous.

Israel is not the worst human rights violator in the planet. It isn’t in the bottom hundred.

Jews who identify with Judaism, in general, know in their gut that these obsessive attacks on Israel are fueled by Jew-hatred, just as blacks know when they are being targeted that there is an underlying racism that can explain the many, many examples of discrimination theyexperience. This is true no matter how many Beinart-types try to show that each individual act might be looked at, if you squint hard enough, as being innocent.

Beinart only allows that a small number of anti-Zionists are antisemitic, like Farrakhan or David Duke. This is also an insult. Anyone who would want to minimize racism would be rightly questioned as to his or her true agenda, and when Peter Beinart wants to minimize left-wing antisemitism he should be questioned as well – why do you believe that Jews should shut up about their feeling attacked, consistently, daily, in the media under the guise of “anti-Zionism”? Other kinds of bigotry are amplified by the Left and the benefit of the doubt is given to the victims.

Unless the victims are Jews.

Is 100% of anti-Zionism antisemitic? Maybe not. But 98% is, and pretending that the 2% is the majority is unconscionable and ultimately an apologia for today’s brand of Jew-hatred.

The obsessive attacks on Israel are indicative of a much bigger problem, and that problem isn’t that Israel deserves to be attacked way out of proportion to any real or imagined crimes it has done. The problem is exactly antisemitism pretending to be mere anti-Zionism – an antisemitism that can be loudly and proudly defended thanks to people like Peter Beinart who can provide a Jewish cover for the underlying hate that animates it.