The Americans for Peace Now webpage describes the group this way:

APN is the sister organization of Shalom Achshav, Israel’s preeminent peace movement. APN’s mission is to educate and persuade the American public and its leadership to support and adopt policies that will lead to comprehensive, durable, Israeli-Palestinian and Israeli-Arab peace, based on a two-state solution, guaranteeing both peoples’ security, and consistent with U.S. national interests. We also work to ensure Israel’s future and the viability of Israel’s democracy and Jewish character through education, activism and advocacy in the United States, and by mobilizing American support for Shalom Achshav.

Like J-Street, they say they are Zionist and pro-Israel and support Israel as a Jewish state.

Like J-Street, they are far less pro-Israel than they claim.

Today, they are hosting Peter Beinart, who is on a self-promotional blitz this week to gain support for his vision of the destruction of the Jewish state: 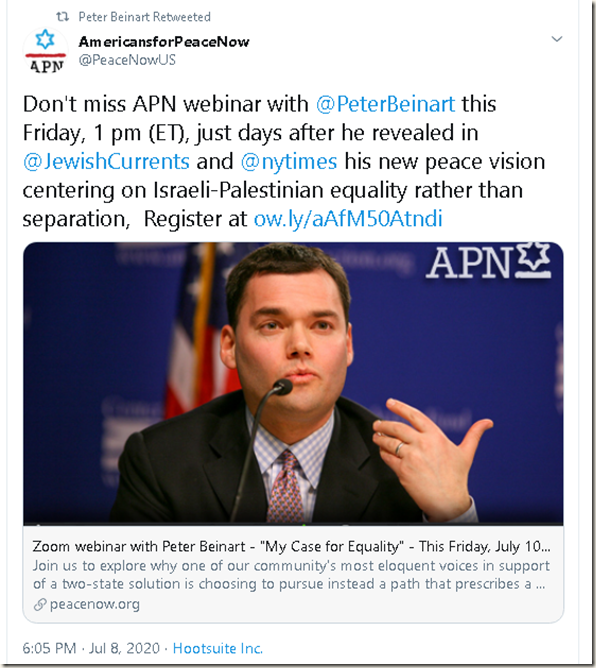 You cannot claim to be pro-Israel while supporting the end of Israel and the likely slaughter of Jews that would follow.

APN justifies this webinar by saying “APN maintains our strong support for a two-state solution. We also believe that open conversation and critical thinking is crucial to growing a vibrant peace movement.”

If that is true, they would have hosted representatives of the Trump administration, to have an open mind about his two-state vision. If they care about open conversation, they would host Jews who live in Judea and Samaria once in a while.

They don’t. But they are eager to promote a one-stater that is officially against everything they claim to stand for.

Apparently some in the Jewish Left have been itching for a reason to abandon even the pretense of supporting Israel as a Jewish state. Peter Beinart has given them the excuse they have been looking for.