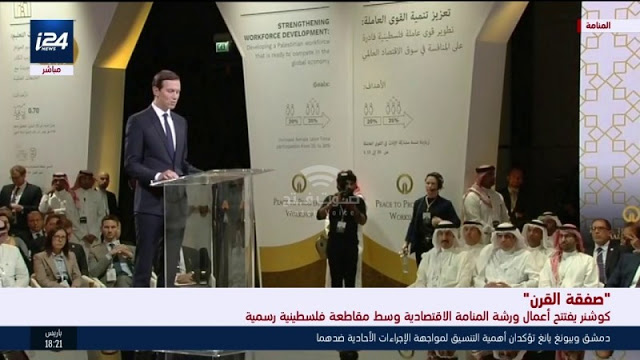 The Palestinian Authority on Saturday night released Hebron businessman Saleh Abu Mayala after he had been detained upon his return from the US-led economic conference in Bahrain.

According to Palestinian reports, the decision to release the businessman came following a threatening letter from the US Embassy.

Mayala had attended last week’s conference in Bahrain with a small group of Palestinian colleagues, led by businessman Ashraf Jabari, who is viewed with deep suspicion by fellow Palestinians and authorities for his close ties to Jewish settlers in the West Bank.

A PA security official said intelligence services detained Mayala in Hebron for interrogation, without elaborating on the reason for the arrest.

Aside from Jabari, the identities of the other Palestinian participants were not publicly announced, though a picture of some of them at the conference was widely circulated on social media.

Another participant, speaking on condition of anonymity for fear of reprisal, said he and the other Palestinian attendees feel they are in “great danger,” having been threatened by the PA and on social media.

Intelligence officers summoned another conference participant, Ashraf Ghanem, also from Hebron, by phone on Friday night, after they did not find him at home. Instead of turning himself in, Mr. Ghanem was sheltering on Saturday in Mr. Jabari’s house, according to the two men, in the Israeli-controlled section of Hebron — an area where the Palestinian Authority security forces cannot operate without prior coordination with the Israelis.

A Palestinian security official, who spoke on condition of anonymity because he was not authorized to speak publicly on a sensitive security issue, said the Palestinian businessmen’s participation in the conference was “tantamount to betrayal,” adding that Palestinian law punishes those who betray their homeland. Once the Palestinian leadership had decided to boycott the event, he said, participation was not optional or a matter of individual freedom.

A second government official, also speaking on condition of anonymity, confirmed the arrest. He said there had been public pressure on the Authority to put those who attended the conference on trial.


Reached by phone, Nabil Abu Rudeineh, the Palestinian Authority’s minister of information, said he did not know anything about Mr. Abu Mayala’s arrest.

That is only the beginning of the farce.

[Abu Mayala’s] family said: “From the first moment we learned that a family member was present at the conference, we denounced this news and took the appropriate measures. We asked him to leave immediately and return to Hebron and heresponded to our request and contacted the relevant authorities.

Al Jazeera reports that the businessmen are being threatened:

Earlier this week, Palestinian social media users circulated online a list of Palestinian businessmen who attended the event in Manama.

The handful of Palestinian businessmen who attended the workshop have been branded as “collaborators” by some in the Palestinian leadership.

Perhaps the most absurd part of this story is that before the conference, PLO executive director Saeb Erekat claimed that all Palestinian businessmen voluntarily boycotted the conference – an allegation that the world media believed – but he offered to “help” anyone who felt threatened to attend, asking them to reveal themselves beforehand. 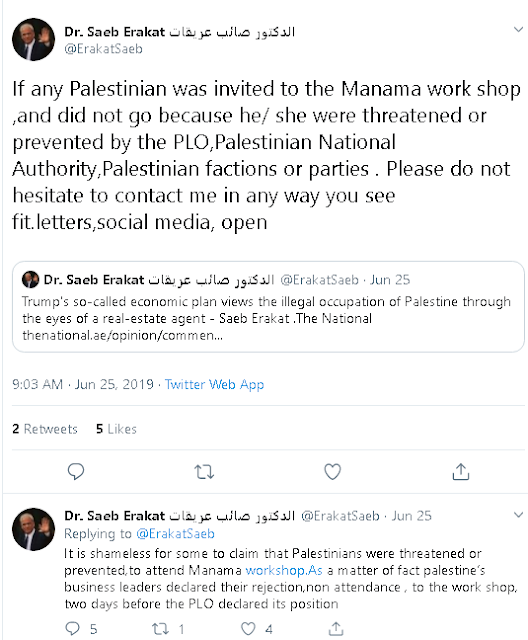 No one was stupid enough to do that.