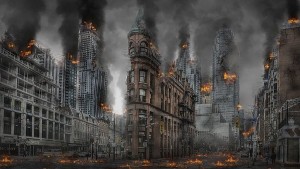 Ramallah, December 13 – Youths in the Palestinian-administered territories admitted uncertainty today regarding the specific offense they are meant to be resisting via violent protest, given the plethora of triggers under discussion in Arab media of late.
While international media have reported the latest Days of Rage as outgrowths of US President Donald Trump’s announcement that the country now recognizes Jerusalem as Israel’s capital, local protesters appear less confident in the precision that description, as in recent months and years the list of developments used as pretexts for Palestinian outpourings of murderous riots has grown beyond the simple invocation of “Occupation” that once served the uncomplicated purpose.
Would-be rioters milled about the de facto Palestinian capital this morning attempting to arrive at a coherent, unified conception of the motive for going on a hoped-for deadly rampage against Jewish targets, meeting only mixed success. Several hundred did manage to perform their routine rock-, brick-, and firebomb-throwing at Israeli troops stationed just outside the city, but without the enthusiasm and single-minded purpose characteristic of a single-issue Day of Rage.
“I need to know what I’m trying to kill people for,” complained Ali Latdam, 20. “We always have the Occupation, but that’s kind of a general thing. Usually, when our leaders close schools, order merchants to close and go on strike, and foment unrest at a specific time and place, there’s a narrow focus for the rage. Is it still the Donald Trump thing? Did Israel put metal detectors back near Al Aqsa? Did they destroy another Hamas tunnel? Did a Palestinian get killed trying to stab somebody? Is some imprisoned terrorist in the midst of a declared hunger strike? Or is this just one of those we-need-to-get-our-people-out-into-the-street-and-distracted-by-Israel-so-they-don’t-notice-we’re-oppressing-them-and-robbing-them-blind riots? I’d like to know.”
“It’s hard to get behind a generic ‘I don’t like this’ orgy of violence,” explained Mustafa Massikr, 19. “Purpose is important here. I’m not about to risk my life handling a Molotov cocktail if this isn’t about what I think this is about. There has to to be clarity on this.”
In the absence of that clarity, report participants, unsubstantiated rumors regarding the true spark for the most recent Day of Rage have run rampant. “We had some guys claiming there was another round of cartoons mocking the Prophet,” warned Mr. Latdam. “Spreading reports like that is just plain irresponsible. It’s like no one cares about getting it right. Who’s in charge of these things, anyway?”