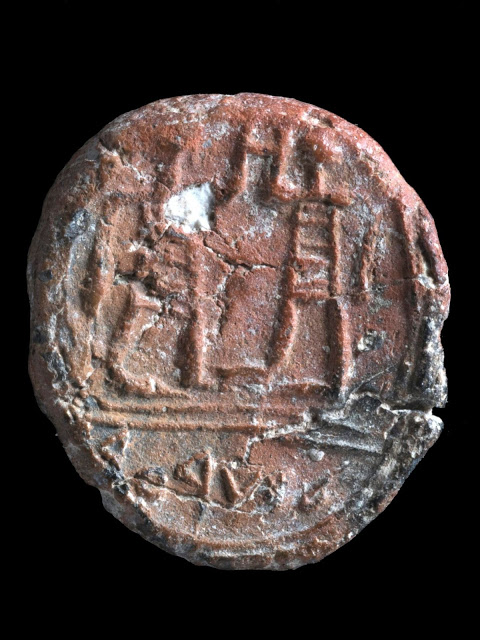 A fantastically preserved seal impression made by the biblical Governor of Jerusalem during the First Temple era has been found by archaeologists where it fell 2,700 years ago.

Many dozens of seal impressions and seals themselves have been found in ancient Jerusalem, including in this area by the Temple Mount. Also, several seal impressions of the Jerusalem governor (“sar ha’ir”), who was the highest-ranking officer in  the city, have been making the rounds in the black market, Dr. Shlomit Weksler-Bdolah told Haaretz.

But this lump of baked clay, all of 1.3 by 1.5 centimeters in size and just over two millimeters thick, is unique in being of unquestionable provenance.

“Ours is special because this was the first time the seal of the Governor of the City of Jerusalem itself was found in the right place,” Weksler-Bdolah says.

The upper part of the governor’s seal impression shows two standing figures facing each other, though their potential identities are obscure, as their heads are depicted as dots, with no special features. The two are garbed in a striped, knee-length garment, say Ornan and Sass.

The lower part has bears the inscription in ancient Hebrew script “sari’r” which the archaeologists are confident is ancient Hebrew for “sar ha’ir” or “governor of the city.” Typical of the time, there is no space between the words.

The Governor of Jerusalem is mentioned twice in Hebrew Scripture, once in 2 Kings 23:7.

The Palestinian Arab Ma’an News Agency, which is touted as independent and objective, reports the story this way in Arabic:


Continuing the attempts of the Israeli occupation to write an imaginary history of its control over the city of Jerusalem, it continues to talk about the artificial history of  the temple and what it calls “its ancient history” in the city.

Israeli Prime Minister Ehud Olmert’s spokesman for the Arab media, Ophir Gendelman, published photographs of relics that the Israeli Antiquities Authority allegedly found in excavations near the Al-Buraq Wall. The occupation claims that they confirm their “ancient history” in the city, and that the seals and artifacts date back to the period of the “First Temple”  2,700 years ago and to one of the “rulers of Jerusalem” mentioned in the Torah.

The article proves again that Palestinian media isn’t objective. It is propaganda.
The idea that Jews controlled Jerusalem, which Muslims freely admitted until recently, is now forbidden to be said. Because politics and hate of Israel is more important than facts or history.
Whether Ma’an writes this way out of fear of repercussions if they reported the story accurately, or whether it simply regards itself as a propaganda arm for Palestinian anti-Israel narrative, is not important. What is important is that the world needs to understand that even “objective” Palestinian media is anything but,  that lying comes easily to them, and that they will not report anything that violates Palestinian political correctness. History and facts be damned.
If you want to laugh, read how Ma’an describes itself:

Ma’an News Agency takes the utmost neutrality in its news editorial policy, aimed at facilitating access to information and promoting freedom of opinion and pluralism in Palestine.

Regular Palestinians know what they are allowed to say to the media and to Westerners.