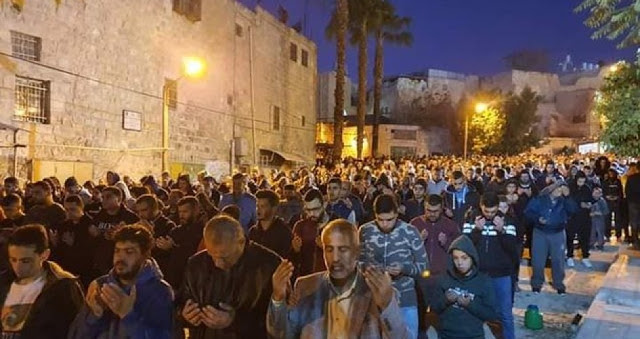 Palestinian Arabs started an initiative that has gotten some traction this year where they hold mass outdoor prayer services at dawn on Fridays near the Temple Mount and Tomb of the Patriarchs, among other places.

The event is called “Great Dawn” and it is meant to send a message that they are there to stay and they want to “defend” Jerusalem.

Today’s Great Dawn took place at 200 mosques in the West Bank and included speeches about steadfastness and Jerusalem.

Palestine Today, the Islamic Jihad-run news site, speaks of the Great Dawn not in religious terms but in military terms. They repeatedly call it a “weapon” that supposedly “confuses Israelis.”

According to the article, the Israelis are so frightened by it that they asked the Temple Mount groups to demand that Israel opens up the Mount for Jews on Fridays and Saturdays, the two days that Jews cannot ascend.

Similarly, the article claims that Israelis are creating new holidays as a pretext to “storm” to the Mount, like Tu B’Shvat (which has existed for thousands of years.)

One of the organizers of the Great Dawn program, Hussam Al-Masri, stressed the importance of continuing active participation in the initiative, saying it is a new weapon and method against the Judaic and Israeli attacks against Islamic sanctities.

The preacher of Al-Aqsa Mosque and the Mufti of Jerusalem Ikrima Sabri says that the initiative “greatly irritates the occupation.”

Similarly, Islamic Jihad leader Sheikh Khader Adnan said, “The prayers of the Great Dawn are a joy for the believers and a grief for the occupiers.”

I cannot see any evidence of Israeli irritation about Muslims praying outdoors, with the slight exception of the extra police that need to be around for crowd control.

The main question is whether the incendiary speeches that accompany these services will turn into incitement for terror.