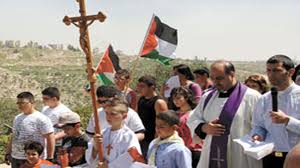 Open Doors, an organization for protecting Christians from persecution, issues a ranking of the 50 worst countries and territories for Christians.

Palestinian Territories makes the list at #49. While not as bad as many other Muslim majority countries, it still is not a great place for Christians. Specific issues are:

• During the WWL 2019 reporting period, at least one female convert has been confined to the family home for some time. Several forced marriages of female converts to Muslim men were reported and a number of converts had to relocate within the country, due to pressure from family and society.

Generally speaking, Christians are affected by Islamic oppression throughout the Palestinian Territories, although there is noticeably more pressure in Gaza than in the West Bank, because of the presence of active radical Islamic movements. Islamic militants more radical than Hamas have been active in Gaza, and are also present in the West Bank. These include Islamic State group (IS) cells – either active or “sleeping”. Despite the fact that these groups do not have any major power yet, their influence cannot be dismissed. In addition, there is a continuing influence and enforcement of age-old norms and values.

In the Palestinian Territories it is very much mixed with Islam and especially affects converts from Islam. As in the rest of the Middle East, religion is connected to family identity. Therefore, leaving Islam is interpreted as betraying one’s family. In general, families put strong social pressure on converts to make them return to Islam, leave the region or to be silent about their new faith. In many cases, converts are alienated from their families as a result of their faith.

Dictatorial Paranoia is connected to plain greed and the safeguarding of the interests of a small group. Nepotism is widespread within the clan-based society and people with connections to those in power are most of the time well-off. Christians have traditionally been involved with Fatah and the nationalist movement. Most Christians support the factions in their struggle against the Israeli authorities and face no difficulties. Nevertheless, without elections for many years, the democratic legitimacy of the government is low. Both parties within the Palestinian Authority, Fatah and Hamas, try to maintain power with all means necessary. Freedom of expression and therefore the freedom of religion is limited; if church leaders criticize the Palestinian Authorities or their Islamic rule, it can have negative consequences, especially in Gaza. Christians also face the pressure of Israeli government control; for example, church leaders in Jerusalem have to operate carefully in order not to lose privileges such as easy access to obtaining visas and permits.