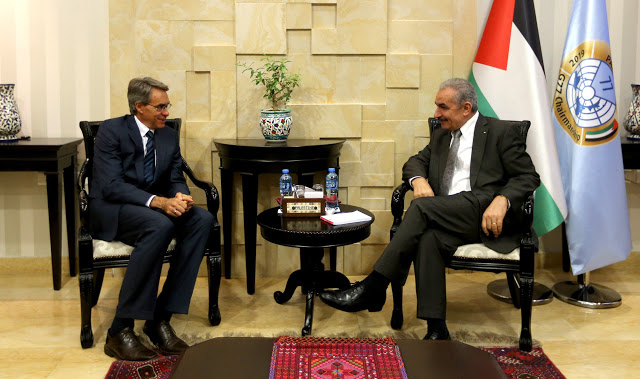 While smiling, Shtayyeh informed Roth that the Palestinian Authority will no longer arrest people for political speech.

Today I met with a senior delegation from HRW, headed by @kenroth and confirmed my government’s commitment to/ guarantee of the right of Palestinian citizens to free speech through constructive criticism. In this regard I emphasised that no arrests or persecution will happen. pic.twitter.com/FWC8HSLe4Z

For some reason, Roth – a supposed defender of human rights – didn’t seem to ask for the Palestinian leaders to drop the laws on their books that allow them to arrest anyone for anything they write online that might be considered offensive to the government.

This 2017 law is so vague as to allow the arrest of anyone for pretty much anything:

According to Article 4, “any person who…has abused any information technology…shall be liable to either imprisonment, a fine between two hundred and one thousand Jordanian dinars, or a combination of the two.” … The ‘abuse’ in question is not defined and open to interpretation by the authorities.

Article 15 states that, in regard to the use of the internet or an information technology, “if a person threatens to commit a felony or an immoral act, they shall be punished by temporary hard labor…”. Again, the definition of an ‘immoral act’ is up to the discretion of the authorities and a felony can constitute any act detailed within this Presidential decree, or any other.

Regarding freedom of the press, the most threatening section is Article 20. It declares that, “anyone who creates or manages a website or an information technology platform that aims to publish news that would endanger the integrity of the Palestinian state, the public order or the internal or external security of the State shall be punished…” with a fine between one thousand dinar [$1414  USD] and five thousand dinar [$7070 USD], at least a year of jail time, or both.

Further to this, the second section of the Article states that “any person who propagates the kinds of news mentioned above by any means…shall be sentenced to a maximum of one year in prison or be required to pay a fine of no less than two hundred Jordanian dinar [$283 USD] and no more than one thousand dinars [$1414 USD] or be subjected to both penalties.”

This means that not only is the writer, or publisher of the news liable to be punished, something as simple as a share on Facebook could result in a fine, jail time, or both. The decree even goes as far as to criminalise the use of any means to bypass the blocking of certain websites, such as a VPN. Article 31 mandates a minimum sentence of three months or a fine of between five hundred ($707 USD) and a thousand dinar ($1414 USD).

All of the above is compounded by Article 51, which states that “[i]f any of these offences are committed for the purpose of disturbing public order…or with the intention of harming national unity…the penalty shall be hard labour or temporary hard labour.”

In essence, besides the infringement on freedom of the press, the PA can now imprison and fine individuals for a Facebook share, watching Game of Thrones using a VPN, making an ‘offensive’ meme, posting a tweet against certain policies, or asserting political allegiances.

That’s just one law. There is another law criminalizing “insulting the President” and “extending the tongue” against the Palestinian leadership.

These laws are on the books. They can be and are used regularly. The only real reform would be to strike them from the laws – but Roth didn’t even ask for that. He believed a “pledge’ that the laws won’t be enforced any more.

Shtayyeh is a puppet of Mahmoud Abbas. Yet Ken Roth, instead of pushing for real reform as the head of a major human rights organization should do, simply thanked Shtayyeh for his worthless promise.

The contrast between how Roth insults democratically elected Israeli leaders and how he fawns over cogs working in Abbas’ dictatorship could not be starker.