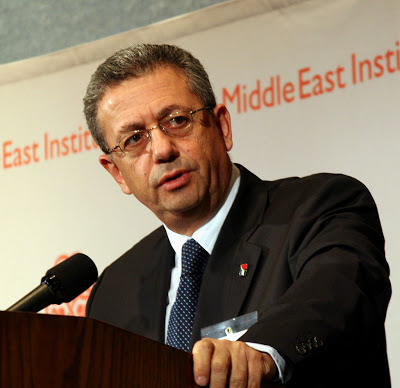 Here is one of those throwaway stories that shine a lot of light over how Palestinian leaders think and act.

It starts off as a routine-sounding denunciation of Israel’s closing the Temple Mount last Friday, but the details are more enlightening:

Dr. Mustafa Barghouthi, Secretary General of the Palestinian National Initiative, called on all Arab and Islamic states to impose immediate sanctions against Israel and its government in response to its unprecedented practices towards the first Qiblah and the third holiest shrine, Al-Aqsa Mosque and against the city of Jerusalem and its people the Palestinians.

Bsrghouti is a former leader of the Palestinian Communist party. Suddenly, this staunch secular Palestinian cares about the “first Qiblah.”

Barghouthi said Netanyahu with his ministers are hatching dangerous schemes to divide and Judaize the Al-Aqsa Mosque and if it succeeded to close Al Aqsa in the old city of Jerusalem without consequences, it would not hesitate to repeat this crime and the escalation of incursions of settlers to the Al-Aqsa Mosque and to divide it, as it  did to the Ibrahimi Mosque in Hebron.

He added that after fifty years of occupation of the Al-Aqsa Mosque and the seventy years of the Nakba, and after the majority of Palestinians, Arabs and Muslims are prevented from visiting,  it is high time to deal with what Israel is doing, which began which the Palestinian people, but aims to devour the whole region and impose its hegemony on them.

I never understood how a nation that is so hell-bent on expansionism and hegemony has given away the Sinai, the Gaza Strip, southern Lebanon and much of the West Bank – far more than half the territory it once controlled.

But it is all part of the evil plan.

A Palestinian official can make statements like this without the slightest fear that any newspaper or politician will make fun of him for saying such inanities. On the contrary, if anyone would criticize Barghouti, they would be the ones who would be criticized and ostracized by mainstream Palestinian opinion!

It cannot be emphasized enough: truth is not a Palestinian value.

At the meeting I attended last week hosted by Phyllis Chesler, author Tuvia Tenenbom said that he once heard a Palestinian official talk about the “10,000 year history of Palestinians” in the region. Tenenbom (pretending to be a non-Jewish sympathizer) acted offended and said, “How dare you say that! It is a 30,000 year history!” The official agreed, of course, it was 30,000 years, he was sorry he misspoke.

How can one make peace with people who have literally no idea of what truth even means?