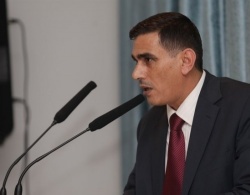 Dr. Nasser al Lahham, editor of the independent Ma’an news agency, wrote an explicitly antisemitic editorial today where he accused all rabbis in Israel of wanting to enslave Arabs and he predicted that Arabs will eventually take brutal revenge against Jews.

He started it off by claiming two alleged racist quotes from Israeli Jews. the first, which he attribute to a “settler” who had cut down olive trees speaking to Palestinian farmers, is that “we are the children of God and you serve us.” The second was supposedly from a Tel Aviv restaurant owner who is claimed to have said, “I want Arabs and Arab girls to serve me, for Fatima to clean the bathrooms and Aisha to be work in the kitchen.”
I cannot find either quote anywhere. I have never even seen any quote from any Jew who admitted to cutting down olive trees. I asked Dr. Lahham for the source but have not received an answer.
This doesn’t mean that there aren’t Jewish racists – of course there are – but like any bigot, Lahham extends the alleged racism of two random Jews based on probably fabricated quotes into all Jews in Israel.
He claims that “The rabbis of Israel have lost their mind – the rabbis of Safed issue rulings to enslave Arabs, steal olives and cut down trees.” This is fiction.
He then ludicrously claims “we see Jewish settlers from Hebron and Yitzhar entering the Al-Aqsa Mosque and insulting the Prophet Muhammad inside the mosque.” This is an absurd lie. Jews never even enter the mosque, and Jews visiting the Temple Mount are interested in the holiness of the site and its history, not in insulting any Muslim prophet.
Once Lahham incites his readers to hate Jews with lie after lie, he then goes on to issue a warning to American rabbis.  Unless they do something to reign in the rogue Israeli racist Jews who want to enslave and murder all Arabs, Lahham warns, “no one, not even Facebook, Fox News, or a loud Trump will be able to prevent hundreds of millions of Arabs from taking revenge and tearing up Jewish flesh on the streets.”
Ma’an claims to be a professional news organization with the highest standards of journalism. Its editor literally makes things up and reports them as fact – with the intent to incite violence. Then, like any mobster, he “warns” that unless people do what he wants, bad things will happen – which happen to be the bad things that he himself is encouraging with his bald-faced lies.