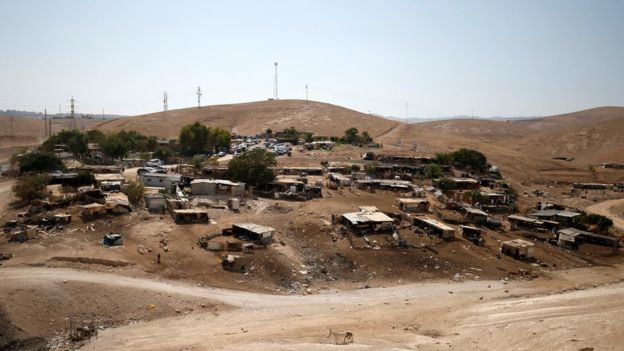 Israel’s Supreme Court has rejected appeals against the demolition of a Bedouin village in the occupied West Bank whose fate has been a subject of international concern.

Judges upheld an order to raze Khan al-Ahmar, where about 180 people live in shacks between two Jewish settlements.

Israel’s government says the structures were built illegally, but Palestinians say permits are impossible to obtain.

An injunction against the demolition will expire within seven days.

The United Nations has called on Israel to allow the Bedouin to remain on the land, saying such demolitions are against international law.

The real story behind Khan al Ahmar can be seen in this video by Regavim and in a must-read article at JNS:

Khan al Ahmar is a huge symbol for Palestinians and their European fans, even though every structure there was built illegally and it is not at all against international law for Israel to enforce building regulations. Many members of the clan have already agreed to move to free, new houses built by Israel for them, houses hooked up to municipal plumbing and electricity.

An interesting story from Wafa today shows how much Palestinian leaders are willing to weaponize children to make Israel look bad:

The Palestinian Ministry of Education decided on Thursday to transfer Jordan Valley students to study at the School of Khan Al Ahmar.
The ministry pointed out that this step comes in conjunction with the decision of the Israeli High Court to demolish Al-Khan Al-Ahmar village and its only school, stressing that the decision of the Court is unfair and contrary to international resolutions that provide for children’s right to education and ensure their access to a safe and stable educational environment .

The PA is going to disrupt the studies of children and will bus them miles from their local schools to a shack near Jerusalem in the hope of getting some good photos of “children being evicted from their school.”

This by itself shows that the PA cares nothing about its own people and will use them in any way possible as public relations pawns against Israel.