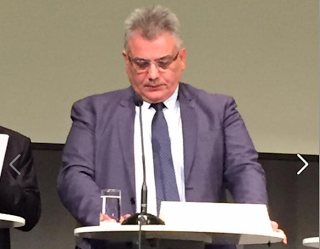 Israel’s ambitious project to construct a canal linking the Red Sea to the shrinking Dead Sea will also see the transfer of 30 million cubic meters of water to the Palestinian Authority, under an agreement signed Wednesday at a global water conference in Stockholm.

The agreement, signed at the annual The World Water Week, was backed by Jordan, Egypt, Saudi Arabia and the other Gulf states, but sparked an angry outburst by the Palestinian representative against Israel’s water policies.

Likud MK Ayoub Kara, who represented Israel at the annual conference, said the transfer would begin within the next month.

“We brought up the creative idea for the transfer of 30 million cubic meters of water to the Palestinians next month within the framework of the canal project, and the initiative was praised by members of the council,” he told Israel Radio on Thursday.

“This praise for the initiative pressured the Palestinian representative, who took to the stage and was shouting like you’ve never seen, prompting security to remove him from the stage,” Kara added.

I cannot find confirmation of Palestinian water minister Mazen Ghoneim being removed, but his speech was a rant against Israel that did not seem to acknowledge Israel’s actions.

The important part of the story is that the optics for Palestinian leadership had been extraordinarily bad lately in the Arab world.

The gap between how Arab states are praising this agreement and how Palestinians are responding to it is most telling. It is more evidence that the Arab world is sick of the Palestinian issue – and the reason is because the Palestinian leadership itself shows little interest in solving the problem, choosing instead to publicly bash Israel even when Israel is trying to help them.

In the same vein, air force pilots from the UAE and Pakistan participated in the annual Red Flag exercises in Nevada in August – together with Israel.

When there is more overt cooperation between Israel and major Muslim countries than with Palestinians, you know that the Palestinians are on the outs. Yet years of anti-Israel rhetoric has painted them in a corner of their own devising where they must keep their  own cooperation with Israel as hidden as possible.

Local elections are coming up in the territories – elections that may show Hamas to be more popular than Fatah. Mahmoud Abbas is panicking. There are reports that Mahmoud Abbas is attempting to reconnect with his bitter rival, former Fatah strongman Mohammed Dahlan who now lives in exile, and who still remains popular.

The Palestinian Authority is being pressured by its own people, by Hamas, and by the Arab world. If it would have been preparing its people for peace with Israel instead of incitement it would be in much better shape. Now it is viewed as too intransigent for the Gulf states and too moderate for its own people.

Things will come to a head for the PA sooner rather than later.