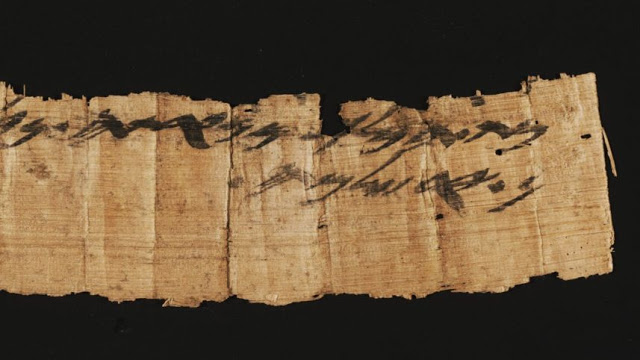 Yesterday, the Israel Antiquities Authority announced the discovery of an ancient papyrus that mentions Jerusalem:


A rare and important find was exposed in an enforcement operation initiated by the IAA’s Unit for the Prevention of Antiquities Robbery: a document written on papyrus and dating to the time of the First Temple (seventh century BCE) in which the name of the city of Jerusalem is clearly indicated. This is the earliest extra-biblical source to mention Jerusalem in Hebrew writing.

Two lines of ancient Hebrew script were preserved on the document that is made of papyrus (paper produced from the pith of the papyrus plant [Cyperus papyrus]). A paleographic examination of the letters and a C14 analysis determined that the artifact should be dated to the seventh century BCE – to the end of the First Temple period. Most of the letters are clearly legible, and the proposed reading of the text appears as follows:

This is a rare and original shipping document from the time of the First Temple, indicating the payment of taxes or transfer of goods to storehouses in Jerusalem, the capital city of the kingdom at this time. The document specifies the status of the sender of the shipment (the king’s maidservant), the name of the settlement from which the shipment was dispatched (Na?arat), the contents of the vessels (wine), their number or amount (jars) and their destination (Jerusalem). Na?artah, which is mentioned in the text, is the same Na?arat that is referred to in the description of the border between Ephraim and Benjamin in Joshua 16:7: “And it went down from Janohah to Ataroth, and to Na?arat, and came to Jericho, and went out at Jordan”.

According to Dr. Eitan Klein, deputy director of the IAA’s Unit for the Prevention of Antiquities Robbery, “The document represents extremely rare evidence of the existence of an organized administration in the Kingdom of Judah. It underscores the centrality of Jerusalem as the economic capital of the kingdom in the second half of the seventh century BCE. According to the Bible, the kings Menashe, Amon, or Josiah ruled in Jerusalem at this time; however, it is not possible to know for certain which of the kings of Jerusalem was the recipient of the shipment of wine”.

Israel Prize laureate and biblical scholar Prof. (Emeritus) Shmuel Ahituv attests to the scientific importance of the document, “It’s not just that this papyrus is the earliest extra-biblical source to mention Jerusalem in Hebrew writing; it is the fact that to date no other documents written on papyrus dating to the First Temple period have been discovered in Israel, except one from Wadi Murabba?at.  Also outstanding in the document is the unusual status of a woman in the administration of the Kingdom of Judah in the seventh century BCE”.

A Palestinian “expert” claims that the artifact is fake.

Speaking to Al-Ain, Dr. Jamal Amr, the head of the manuscripts and heritage department at Al-Aqsa Mosque said that the announcement by the Israelis is “ridiculous” and is part of a series of faked archaeological findings that Israelis have always done, calling them a “Jewish ISIS.”

He said, “They are a terrorist group, the Jewish Daesh organization, publicizing corrupt merchandise that has not convinced the world that voted in favor of the facts and the heavenly books that attest to this place as being for Muslims only.”

Amr mocked the size of the Israeli manuscript, saying that the Jews claim that the temple was a shrine on an area of ​​144 dunams which used where large quantities of cedar and gold, all of which disappeared without a trace, and yet this 11 cm papyrus survived.

Amr says that that this is not the first time that the Jews faked archaeology, mentioning a previous find of a scepter of King David* that was found to be fake.

Amr believes that this papyrus was quickly faked as a reaction to the UNESCO saying that the Temple Mount was only Muslim.

Which makes perfect sense when you live in a society where lies and truth are interchangeable and where facts can and should be ignored when they violate one’s beliefs.

*I could not find anything about a scepter supposedly from King David, but there is a famous scepter head from the First Temple period where experts disagree on the authenticity of its inscription. Biblical Archaeological Review maintains that it is authentic based on the experts it has interviewed and that indeed it is likely to have been used in the First Temple. (Others claim it was from a different, pagan temple.)