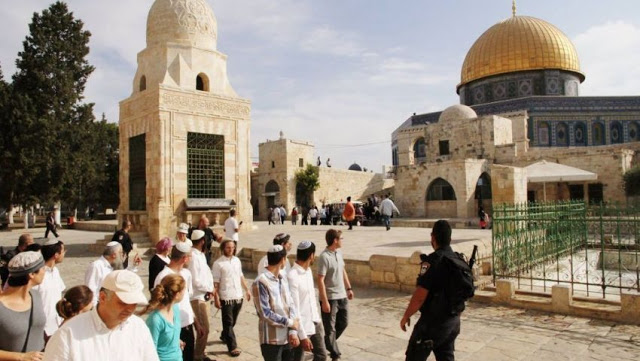 On Monday, 30 September 2019, hundreds of Israeli settlers raided al-Aqsa Mosque in occupied East Jerusalem’s Old City to celebrate the Jewish New Year. Israeli forces arrested a Palestinian young man and an elderly woman while present in al-Asbat Gate area. The Islamic Endowments (Awqaf) Department stated that around 416 settlers, including the Israeli Minister of Agriculture, Uri Ariel, and dozens of rabbis, raided al-Aqsa Mosque on 29 and 30 September 2019 to celebrate the Jewish New Year and perform prayers in al-Rahma, al-Qataneen and al-Selselah Gates, under Israeli forces and intelligence officers protection. The Islamic Endowments Department added that the Israeli forces were deployed in the al-Aqsa Mosque yards and gates, where they took photos of Palestinian worshipers.

Apparently, Jews peacefully walking around and praying is considered a violation of human rights to this respected Palestinian NGO.

Preventing Jews from practicing their religion in their most sacred site would be a fulfillment of human rights, it seems.