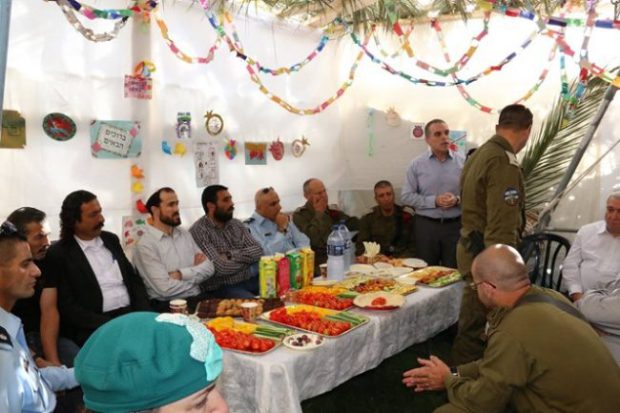 William Booth in the Washington Post writes a heartwarming story:


The gathering wasn’t exactly unprecedented. Jewish settlers and their Palestinian neighbors have met quietly before, many times. But not like this. This meeting, this was rare. 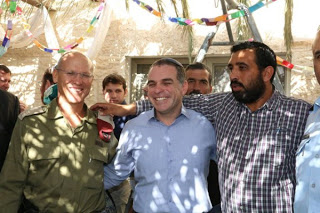 The settlement of Efrat is a bedroom community of 10,000 affluent Jews, including many Americans, a few miles south of Bethlehem in the Israeli-occupied West Bank. The residents of Efrat live the good life in a growing hilltop community that the United States considers illegal and an obstacle to peace.

The Efrat mayor, Oded Revivi, who is also a colonel in the Israeli army reserve, invited Palestinians from surrounding villages to come to his house and celebrate the Jewish holiday of Sukkot, the Feast of Tabernacles, when the faithful gather in palm-roofed huts, a remembrance of the 40 years of wandering landless in the desert back in the time of Moses.

A couple dozen Palestinians accepted the mayor’s invitation this week to share brownies, grapes, cookies, apples and coffee, alongside 30 Israeli settlers. This was a first.

The idea? The sides were here to talk, perhaps even to bond — no matter if the dynamic was a little awkward and asymmetrical.

Everyone was very polite. A Palestinian farmer sat next to an Israeli diplomat. They live a mile and a world apart. A rabbi from the settlement broke bread with a Palestinian stone mason. Guests shook hands, took selfies, patted one another on the back. Both sides seemed a little stunned to be together celebrating a Jewish holiday.

The Palestinians spoke decent to fluent Hebrew. The settlers didn’t speak much Arabic.

One Palestinian stood and told the guests that he didn’t want to see the West Bank “turn into Syria.”

Another said he didn’t like “being lumped together with the terrorists.” 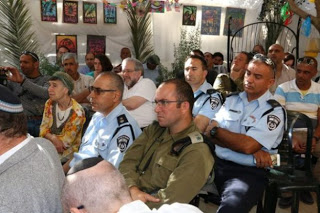 Everyone talked about peace. Nobody really talked about one state or two states. They didn’t mention Prime Minister Benjamin Netanyahu or Palestinian Authority President Mahmoud Abbas.

Some Palestinian guests felt comfortable enough to complain out loud about how they are treated. Some Israelis mentioned the wave of Palestinian stabbing attacks against them.

There were some remarkable moments.

Ahmad Mousa, 58, a contractor from the neighboring Palestinian village of Wadi Al Nis, said, “We consider ourselves part of the family, part of the people of Efrat.”

You do not hear that much in the West Bank, at least not in public, with smartphone cameras rolling.

He said, “Seventy percent of our village works in Efrat. They treat us very well and we are very good to them, too.”

Noman Othman, 41, a construction worker from Wadi Al Nis, said this was his first time as a guest in a home in the settlement, although he had worked here for years, building houses.

“This is good,” he said. “Our relationship is evolving.”

Asked whether he bore any grudge against the expansion of Jewish settlements in the West Bank, now home to 400,000 settlers, which the Obama administration has condemned as “an obstacle to peace,” Othman said nope. He didn’t have any problem with Efrat.

If there was a Palestinian state someday, a dream Palestinians say is growing more distant, Othman said the Jews in Efrat “should stay on their land.”

He saw it this way: “These are their houses. They bought them with their own money. We should have no problem living together — if there is peace.”

Ali Musa, 49, came from the village of Al Khader. He told the gathering: “I came for a reason. I came to talk about our relationship, between you and us.”

He reminded his hosts that there is a locked yellow gate that blocks the entrance to his village, a closure enforced by Israeli security ­forces. “That gate should be removed,” Musa said.

He added: “And that racist sign? That should also be removed. It’s outrageous. It prevents our Jewish friends from visiting us.”

Musa was referring to the large red signs posted across the West Bank warning Israelis in capital letters that it is against the law and “dangerous to your lives” to enter “Area A,” cities and villages under full control of the Palestinian Authority.

The mayor gave a short speech. “Some people say there will be one state, some say two states,” Revivi said. “As neighbors, we are already living together.”

Revivi hailed the men who came to his home as “true men, courageous men.”

“I know there were men I invited and they did not come,” he said, “because this takes initiative and courage.”

But in Palestinian media, this story was treated as a catastrophe.

As soon as this story was reported, the deputy governor of Bethlehem Mohammed Taha promised an investigation and possible arrests for this crime of meeting Jews who live in Judea. Taha said he will initiate legal proceedings against the participants, saying it is not the culture and education of Palestinians to visit these Jews, it is a “dangerous and unacceptable phenomenon,” and he will follow up on the matter with Palestinian security services and factions.

Indeed, that is what happened:

The Palestinian Authority’s (PA) security forces arrested three Palestinian Arabs from the Gush Etzion area who “dared” to visit the sukkah of Oded Revivi, mayor of the town of Efrat.

Channel 2 News reported on Thursday evening that the Arabs who were arrested were questioned over allegations they met with “baby-killers”, an apparent reference to General Nitzan Alon, the head of the IDF’s Operations Directorate, and the Shai District Police Commander, who were also guests in the same sukkah.

Revivi said on Thursday evening, “Yesterday we sat in the sukkah – Jews and Muslims. We ate, drank and talked about common themes and our hope for a better neighborhood and for peace. Today the PA summoned some of the Muslim guests for questioning.

“All those who pressure the Israeli government to enter a peace process with the Palestinian Authority should be reminded that they behave in a way that does the opposite of encouraging peace with their Jewish neighbors,” continued Revivi. “An authority which names squares after suicide bombers and summons for questioning citizens who drink coffee and talk about peace with their Jewish neighbors is not one that promotes peace.

“I salute my neighbors who were not afraid to come to our sukkah yesterday, to talk about peace, who asked to be photographed and to show the world that they are brave enough to stand up for peace,” he stressed.

I hope that the Washington Post publishes a follow-up. The arrests are just as important a story as the meeting was.