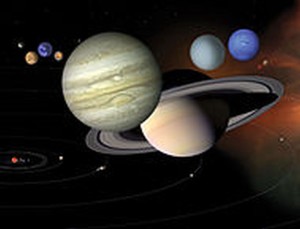 Ramallah, July 11 – The longstanding assumption governing human conception of the solar system and beyond must undergo revision, insists a group of West Bank and Gaza scientists who accuse the scientific mainstream of ignoring definitive evidence that they and their people, not the Sun, occupy the center of everything.
Palestinian astronomers convened a press conference today (Thursday) to rail against the scientific establishment for its refusal to recognize mounting evidence against the centuries-old heliocentric model of the solar system, which has the Sun at the center and numerous other bodies in orbit around it. The astronomers pointed to the phenomenon of every progressive cause allying itself with the Palestinian national movement, which they argue indicates that Palestine, or at least Palestinians, occupy the center of the universe, and nothing else can.
“Anyone observing the movement of social justice activity over the last several decades can come to only one conclusion,” stated Professor of Astrophysics Inr Shah. “All social justice movement eventually comes to revolve around the Palestinian cause, indicating that the Palestinian cause constitutes the bulk of the mass, and exerts the most gravitational pull. We see this with the Women’s March, human rights organizations in general, child welfare groups, and countless other instances. Astronomers who dismiss this evidence have much to explain.”
Professor Shah suggested that establishment astronomy feels beholden to Zionists. “Just look at the number of Jews among Nobel Prize winners in the hard sciences,” he indicated. “That can’t be a coincidence. We know who holds sway and calls the shots in astronomy and related fields. No one will escape with his career intact if he challenges the so-called ‘consensus’ view of the Sun at the center. We all know who’s behind that.”
The heliocentric model gained currency in the study of the heavens only in the last five hundred years as a better explanation for the movements of celestial phenomena than the ancient geocentric model with the observer, on Earth, as the center. The old model, argue Palestinian scientists, better reflects the truth of a Palestinian-centered solar system and universe.
“In broad terms the geocentric model should once again be considered correct,” noted Bir Zeit University postdoctoral researcher Massieff Iggo. “On the intergalactic scale, or even just in terms of our part of the Milky Way, not much should change in the way we see the universe. But closer to home we’ll see some subtle and not-as-subtle shifts in understanding of the moon, nearby planets, and maybe some asteroids, because it’s not the center of Earth from which to calculate things, but the center of Palestine. That of course can be tricky, because it shifts from day to day as we and our allies decide on new focuses for the world to revolve around.”