Greek Orthodox Archbishop Elias Odeh of Beirut said this past weekend that he supported the demonstrations by Lebanese citizens, and that  “Today, this country is ruled by a person you all know, and no one utters a word, and is ruled by a group that takes up arms,”a clear reference to Hezbollah. 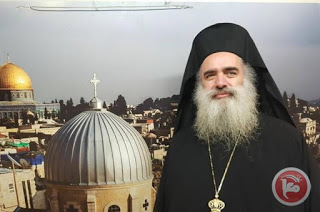 The Palestinian archbishop Atallah Hanna of the Greek Orthodox Church in the Palestinian territories criticized Odeh and defended Hezbollah, saying, “Hezbollah had a role in defending the Christian presence in Syria and more than one location in the Levant,” adding that “using the church’s pulpit to attack a prominent Lebanese party is an unacceptable position that does not represent us as Orthodox Christians.”

Hanna added, “The church is not a place for incitement or offense for anyone, but a place of love and devotion to the noble moral, human and national value.”

That’s funny. Because only this past summer, Archbishop Hanna referred to Israeli Jews as “evil,” saying, “Our resistance to the evil which targets our ancient Christian presence in this holy spot of the world must be through our clinging to our spiritual and faith development and also our adherence to our national identity, we belong to this country and Palestine is our homeland and it is our cause.”

He’s also said that “Zionist Christians do not belong to Christianity.” And many other hateful statements over the years.

Apparently, as with so many other rules, there is an exception for Jews and Zionists.