The Palestinian Authority has named yet another square after a terrorist. The newly inaugurated “Martyr Khaled Nazzal Square,” is named after the terror leader who planned the attack that led to the murder of 22 children and 4 adults in the Ma’alot Massacre on May 15, 1974. This is just the latest example of the PA’s relentless glorification of terrorists.
This new square in Jenin is named after terrorist Khaled Nazzal, the Secretary of the Central Committee of the Democratic Front for Liberation of Palestine (DFLP), and commander of its military branch. He was responsible for the Ma’alot Massacre, during which terrorists took school children and their teachers as hostages, and eventually murdered 22 children and 4 adults. Terrorist Nazzal also planned an attack which resulted in the murder of 4 hostages in an apartment in Beit Shean (Nov. 11, 1974), and a shooting and grenade attack in central Jerusalem in which 1 was murdered and 47 others were wounded (April 2, 1984).
The “Martyr Khaled Nazzal Square” was inaugurated at a rally with PA officials, “under the auspices of the Jenin District and the [Jenin] municipality.” Participants included the Deputy District Governor of the Jenin District, and the DFLP in Jenin.
Monument to terrorist Nazzal, “Martyr Khaled Nazzal Square,” in Jenin 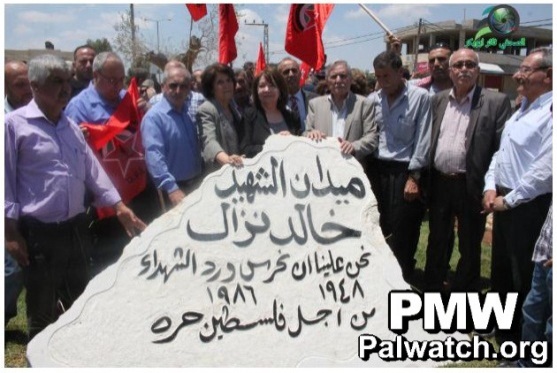 Deputy Mayor of Jenin Mahmoud Abu Mweis spoke at the event and “emphasized that our leadership and our people will continue on the path of the Martyrs.”

This sort of story has repeated dozens of times.

But this time, the pressure worked.

Safa reports that this monument was dismantled last night after Netanyahu complained. 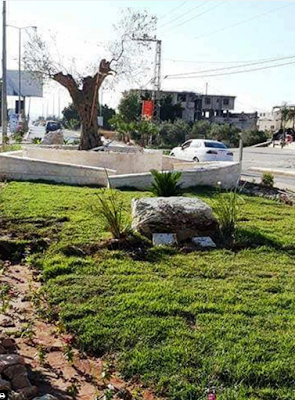 I have never heard of the PA taking one of these down before. And they wouldn’t do it if the pressure wasn’t being felt.

The DFLP protested the dismantling.