TOP NEWS
http://elderofziyon.blogspot.com/2017/03/oy-gevalt-rania-khalek-is-victim-of-bds.html
Have your Kleenex ready for I bring oh-so-sad tidings: ardent anti-Israel activist Rania Khalek has become a victim of economic terrorism. Anyone who has a heart must feel it ache now – after all, Khalek has always done her part to promote BDS campaigns against Israel, fervently hoping that this economic terrorism would lead to the elimination of the world’s only Jewish state. What cruel fate that she’s now finding herself boycotted, divested and sanctioned by many of her erstwhile fans who loved her lies about Israel, but loathe her lies about Syria. 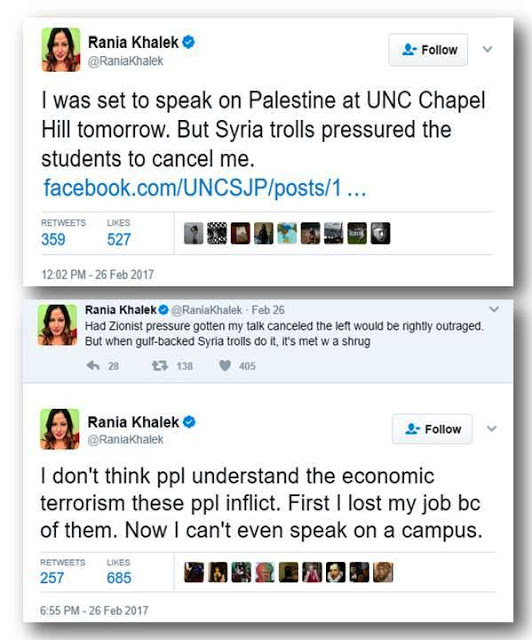 But given the current popularity of fake news, Khalek still has some ardent fans – they either write blog posts railing against her detractors, or, more usefully, donate to her new GoFundMe campaign “Help out Rania”. In just four days, 320 hardcore Rania fans have coughed up more than $10 000 to prevent her detractors from “successfully weaponiz[ing] poverty to silence an independent journalist.” Add to this the almost $7500 she raised last October and the money she likely earns from publishing on various “alternative” sites – includingthe “Grayzone” run by her very dear friend Max Blumenthal – and it would seem that poor Rania is not so terribly poor.
However, now that Khalek is finding herself at the receiving end of the tactics she and her fans have always promoted against Israel, we can learn a whole lot about the real nature of BDS from the very people who love to see it used against the Jewish state and its citizens.
So forget about claims that BDS is non-violent: threateningsomeone’s employment is “violence,” or, as Khalek herself put it, “economic terrorism.”
And while BDS supporters are always proud when they manage to shout down – or even shut down – pro-Israel speakers, it now turns out that silencing someone’s free speech “is fascistic.” 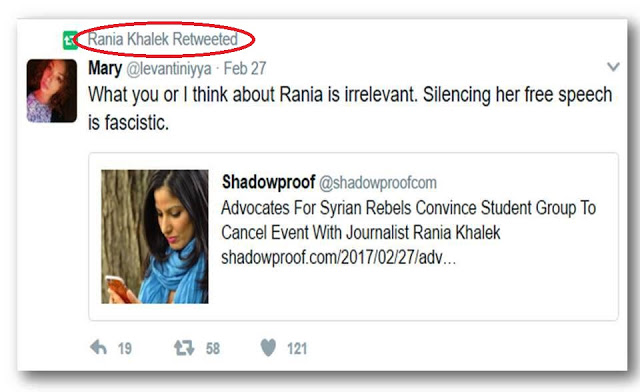 Furthermore, we learn from Glenn Greenwald that even if one doesn’t agree with someone’s views, a campaign to prevent a person from speaking is “toxic.” 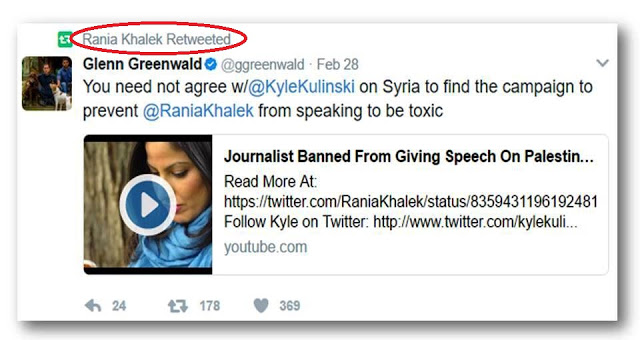 So to sum up: BDS is “economic terrorism,” it is “fascistic” and “toxic.”
Thanks Rania for clearing that up!
I have no doubt that even Khalek and her supporters would agree that something that is terrorist as well as “fascistic” and “toxic” should have no place in universities or anywhere else where human rights are taken seriously. That is of course the reason why Khalek and her ilk spend so much energy on demonizing Israel. But the fact that they obsess about the world’s only Jewish state while ignoring or even whitewashing the atrocities committed by Assad and his allies illustrates all too well how truly toxic BDS is.