Once again, Palestinians are trying to incite the Muslim world to jihad against Israel.

The annual report of the “Al Quds International Foundation” released on Monday claims that Israel now is engaged in 64 separate excavations underneath the Temple Mount, “threatening the collapse” of the Al Aqsa mosque.

The report, which goes through the past year’s event, notes that an Israeli government meeting in one of the tunnels for Yom Haatzmaut sends a clear message that these excavations are supported by the highest levels of the Israeli government “to promote fake Jewish history.”

The incitement against Jews by falsely claiming that they are trying to take over the AL Aqsa Mosque is a lie that has never stopped since the Mufti of Jerusalem started it in the early 1920s. And it is just as potentially fatal now as it was then.
This is every day incitement that the West chooses to ignore.
Here is a photo of the Al Aqsa Mosque after the earthquake in 1927. 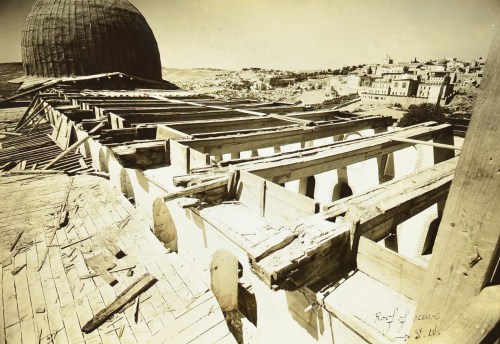 The roof caved in and it took several years to repair.
Notice the rafters. They were examined with carbon dating and found to date from between 1500 and 2900 years ago. The authors of the paper determined that the later beams of cedar and cypress came from the Byzantine church that was erected on the Temple Mount. The older ones, from millennium before the mosque was built?  The authors conjecture that they probably come from a n earlier massive structure built in that time period, but don’t venture a guess as to what it possibly could be.

[T]he existence of the cypress logs dated to the 9th–2nd centuries BCE in the Al-Aqsa Mosque raises many questions concerning their origin in constructions built more than 1500 years earlier.

Israel isn’t trying to destroy the Al Aqsa Mosque, but if it would be destroyed it would help to fix a historic tragedy.