A new Israeli law, approved Monday, will bar entry to any foreigner who supports the B.D.S. movement (boycott, divestment and sanctions) against Israel for its occupation of the West Bank. It’s a strong statement by the Israeli right wing, intended to characterize supporters of the movement as enemies of Israel.

[The law] should be condemned by all who value Israel’s tradition of debate and dissent and who support the search for a lasting peace.

From reading the editorial, one would think that Israel is banning any critics of Israeli settlement policy.

But the actual text says it may ban anyone “who knowingly issues a public call for boycotting Israel that, given the content of the call and the circumstances in which it was issued, has a reasonable possibility of leading to the imposition of a boycott – if the issuer was aware of this possibility.”

In other words, the law would apply to those who are prominent advocates of boycotting Israel and whose calls to boycott Israel can influence others, not anyone who decides on their own to stop using settlement products or who is a critic of Israeli policy as the Times pretends.

The editorial also says “The United States, Israel’s strongest military supporter, has consistently held that settlement building in the occupied territories is illegal and detrimental to seeking a lasting peace.” This is also false, The public position of the US, both the White House and the State Department between the 1980s and the UN vote last December, was that the settlements were an obstacle to peace – but the language of legality was studiously avoided.

It is Orwellian that the New York Times has been advertising how important the “truth” is yet it so easily twists the truth for its readers. 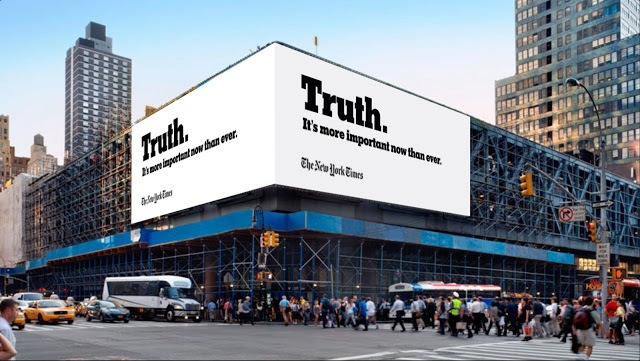