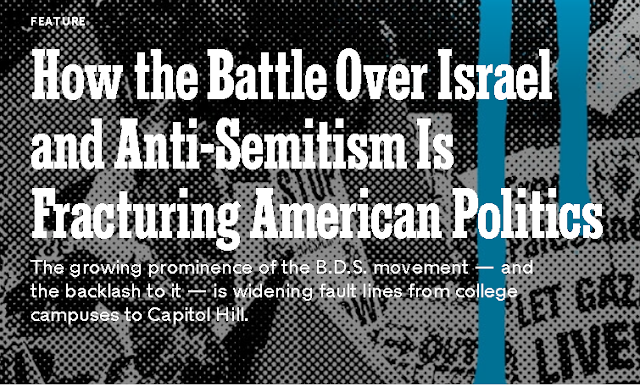 Nathan Thrall has written a 11,000 word article in the New York Times magazine today that is essentially a huge rose bouquet to people who want to boycott the world’s only Jewish state.

The article is filled with slanted and often wrong reporting.

Here’s an example of an outright lie:

Last October, nearly a year after the University of Michigan’s divestment vote, there was an “apartheid-wall demonstration” co-sponsored by the campus Latinx group, La Casa. Pro-Palestinian students erected two cardboard walls, modeled after the 25-foot-high concrete slabs that intertwine with fences and barbed wire to encircle Palestinian communities in the West Bank and East Jerusalem.

Really? The fence is meant to encircle (i.e., imprison) Palestinians?

The only communities in the territories that are encircled by fences are the Jewish villages and towns who are trying to avoid their residents being murdered by Thrall’s wonderful Palestinian muses.

Palestinians claim that the barrier “encircles” Bethlehem or parts of Jerusalem, but it isn’t true.

Here’s an example of the more popular of Thrall’s methods of bias – to say something that the BDSers claim which isn’t true and pretend that there is no counterargument:

The B.D.S. movement casts the Israeli-Palestinian conflict as a struggle against apartheid, as defined by the International Criminal Court: “an institutionalized regime of systematic oppression and domination by one racial group over any other racial group or groups and committed with the intention of maintaining that regime.” (The United Nations defines racial discrimination as directed at “race, color, descent or national or ethnic origin.”) B.D.S. leaders often cite South Africa’s sixth prime minister, Hendrik Verwoerd, who likened Israel to South Africa in 1961: The Jews “took Israel from the Arabs after the Arabs had lived there for a thousand years. In that, I agree with them. Israel like South Africa is an apartheid state.”

But given that the definition of apartheid means domination of one racial group over another, and Israel doesn’t discriminate against its Arab citizens, Israel cannot be an apartheid state. Every nation discriminates against non-citizens!

Thrall doesn’t bother to point that out and the NYY editors didn’t insist that he give another point of view that would demolish the argument.

Even more egregiously, Thrall uses the insane argument that BDSers like to use to support the idea that Israel loves white nationalist antisemites:

To bolster the argument that the Palestinian struggle is a fight against racism, B.D.S. leaders have highlighted the support for Jewish ethno-nationalism by far-right European politicians like President Viktor Orban of Hungary, alt-right figures like Steve Bannon and white supremacists like Richard Spencer, an organizer of the 2017 Unite the Right rally in Charlottesville, Va. That year, Spencer told an Israeli television interviewer: “You could say that I am a white Zionist in the sense that I care about my people. I want us to have a secure homeland that’s for us and ourselves, just like you want a secure homeland in Israel.”

It is elementary logic that A liking B doesn’t mean that B likes A. It is outrageous to quote the antisemite Richard Spencer’s support for the idea of a Jewish state as evidence that Israel supports Richard Spencer.

Far-right websites love to quote BDS leaders – does that mean that BDS is far right? By Thrall’s logic, sure. But for some reason this travesty of an argument is only used to damn Israel.

If one believes that connections like these prove how people think, then the fact that Thrall works for the International Crisis Group which is funded by Qatar – a major supporter of Hamas – means that, by Thrall’s own logic, he is a Hamas supporter.

I could fisk the entire piece. One last example:


Ben-Youssef said most of the members of Congress and staff members she spoke to were aware of Israeli human rights violations against Palestinians under blockade and occupation but were largely uninformed about Israeli discrimination against Palestinian citizens. It was news to many that tens of thousands of Palestinian citizens live in villages that predate the creation of Israel and are unrecognized by the state, receiving little or no water and electricity.

Is the fact that Israel doesn’t provide electricity to unrecognized Bedouin villages in the middle of the Negev evidence of apartheid? Israel has tried for decades to organize and improve the lives of Bedouin by building towns for them with schools and water and electricity. If Israel is against providing electricity to Arabs, why on earth would they spend tens of millions to build entire communities for them with full infrastructure instead of trying to criss-cross the Negev with pipes and wires to scores of tiny villages, almost all built illegally?

How many examples of lies and bias does one need to know that this article does not illuminate anything but is meant to obscure the truth about Israel?

The problem isn’t Thrall, whose bias is obvious. The problem is that the New York Times publishes his “reporting” without informing their readers of his obvious bias, as well as without fact checking even the basics of what he wrote.