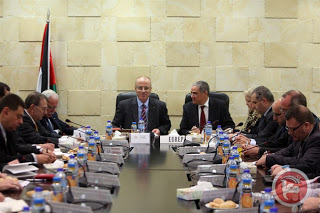 Arabic media has lots of articles like this one:


Prime Minister Dr. Rami al-Hamdalla met with consuls, ambassadors and representatives of the European Union on Wednesday at his office in Ramallah….
The Prime Minister stressed that the insistence of the US administration on its decision to move the US Embassy to Jerusalem and recognize it as capital of the state of Israel will fuel the conflict and will lead to the growth of violence in the entire region, because Jerusalem does not only mean Palestinians but the peoples and Arab and Islamic countries that reject this decision.

These warnings of violence and murder are all over:


Sheikh Ahmed el-Tayeb, the Grand Imam of Al-Azhar which is the supreme Islamic institution of Sunni Muslims, on Tuesday warned that “the gates of hell” will open if the United States goes through with plans to recognize Jerusalem as the capital of Israel and move its embassy to Jerusalem.
In a statement published following his meeting with former British Prime Minister Tony Blair, el-Tayeb said such a move would ignite the feelings of anger among all Muslims, endanger global peace and increase tensions, divisions and hatred around the world.

Given the supposed inevitability of violence that we have been warned about for several days, you would expect normal leaders to issue calls for calm, to insist that people protest peacefully and to eschew violence.

I cannot find a single call for calm among any Arab or Muslim leaders.

I have often pointed out that what doesn’t happen is as newsworthy as what does. Here we have Arab and Muslim leaders, both religious and political leaders, who are warning the West that their people will erupt.

But they aren’t asking their people not to. They aren’t saying that violence is not acceptable, or that they will ensure that protests don’t go out of hand.

No, their warnings to the West are mirrored with a winking message to their own people: We want you to become violent.

They need violence. They need people to be killed, preferably by Israelis. Because if there are no newsworthy violent protests, then they know that they cannot credibly warn of violence the next time they insist that the world do their bidding.

This is what is not being reported by the hundreds of seasoned Middle East journalists and analysts. The warnings of violence are really calls to violence, as the absence of calls for calm proves. Frightening the West with such warnings of irrational Muslims sweeping through the streets, or possible terror attacks, is an integral part of Arab and Muslim political calculus.

Threats of violence is an essential part of Muslim nations’ international politics, but it requires some actual violence for it to remain potent.