Many Palestinian children participated this summer in camps that promoted hate, terror, Martyrdom-death and denial of the existence of Israel. The camps were organized by the PLO Supreme Council for Sport and Youth Affairs and the PA’s National Committee for Summer Camps, both of which are funded by the PA Budget. On its Facebook page, the National Committee for Summer Camps has listed itself as a “governmental organization.” In Arabic it defines itself as “a governmental institution for children aged 6-12 years with recreational activities aimed to develop the Palestinian child in various fields.”

Among the “partners and supporters,” listed on the website of the PA’s National Committee for Summer Camps, are UNICEF and UNDP (accessed Aug. 30, 2017). 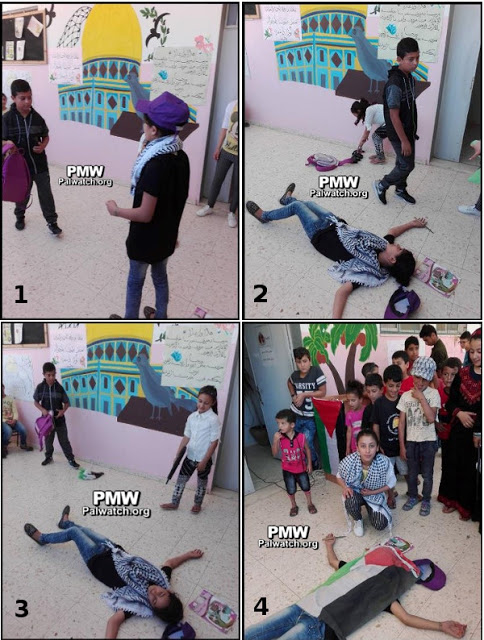 The first photo shows a girl wearing an Arab headdress and playing the part of a terrorist, as she faces off against a boy playing an Israeli. The second and third photos show the Palestinian girl “dead” on the ground with a knife in her hand after the “Israelis” who “shot” her standing next to her. The fourth photo shows a number of children standing behind the terrorist “Martyr” lying on the ground with a Palestinian flag draped over her, as is common practice at the funeral of “Martyrs.”
[Facebook page of the National Committee for Summer Camps, Aug. 3, 2017]

These photos and others that PMW posted of play-acting terror attacks don’t seem to be on the Facebook page of the National Committee for Summer Camps page any more, so there may have been some sensitivity about that after PMW reported it.

But this shows that the PA is no different in teaching their kids to support and idolize terror than Hamas is. The world’s embrace of the Palestinian Authority while considering Hamas a terror group is completely political and not based on their actions nor attitudes.