Drunk on self-importance, the media long ago forgot that their job is to be objective in reporting the news. While the complexity and gravity of our current situation requires nuanced reporting, instead we get spin. The media prefers to curate facts in order to paint the bleakest picture possible. Chris Beck, Splice Today

Chris Beck is not referring to media reporting on Israel. He’s referring to Media Manipulation Via Headlines in Coronavirus Era. One example Beck gives is a headline in The Los Angeles Times: A new high for coronavirus deaths in California as counties push ahead with reopening. As he points out, the article itself — assuming the reader actually makes it to the 6th paragraph — indicates the positive trends that form the basis of the decision to reopen, such as the declining number of newly identified cases and the declining number of hospitalizations — down 15% from its peak, reached 6 weeks earlier. According to Beck,

As the media’s figured out that most people don’t read beyond the headlines, they tailor their headlines like any propagandist would. It’s more indoctrinating than informing. The trick to pulling it off while salvaging your reputation is to promote an agenda without telling actual lies.

And there is an agenda behind the headlines of stories about Israel. Back in March, HonestReporting pointed out a headline from AFP about Israel and the coronavirus:

While the headline implied that Israel had unilaterally closed the West Bank and left the Arabs to fend for themselves, anyone who actually read the article would find out that

o The closure was done with the cooperation of the PA. o They had set up a committee to cooperate on fighting the virus. o Israel still allows Palestinian Arabs to enter Israel for medical treatment. o Palestinian Arabs are allowed to continue working in the West Bank settlements.

In 2016, an attack in Tel Aviv’s Sarona market left four people dead and 16 wounded. It was a terrorist attack, but CNN wanted to be “objective”: 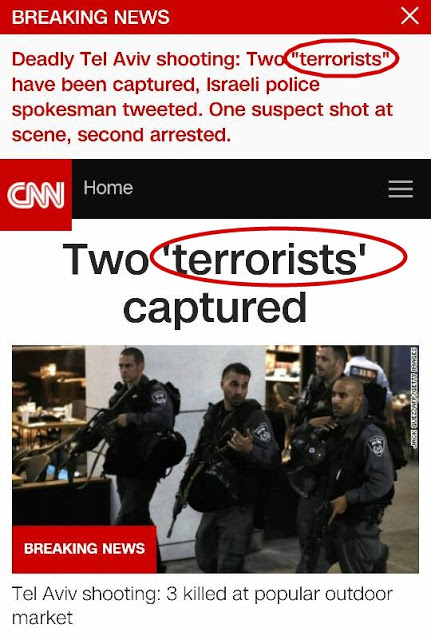 Following an uproar over the scare-quotes, CNN apologized and admitted in a press release “the attacks were, without question, terrorist attacks.” It’s a case of pursuing an agenda without telling actual lies — as Beck put it. And since the media is not pursuing stories about the treatment of Palestinian Arabs elsewhere, such as in Lebanon where they are treated as second-class citizens, it seems clear the bias is not out of the media’s concern for the plight of Palestinian Arabs. Rather than resorting to scare-quotes to avoid labeling Palestinian terrorists as terrorists, the more common method the media uses is to scrub from the headline any hint of wrongdoing at all on the part of the terrorist. A terrorist attack in Jerusalem during which 2 Palestinian attackers attempted to stab police and were subsequently shot, led to this grotesque headline: 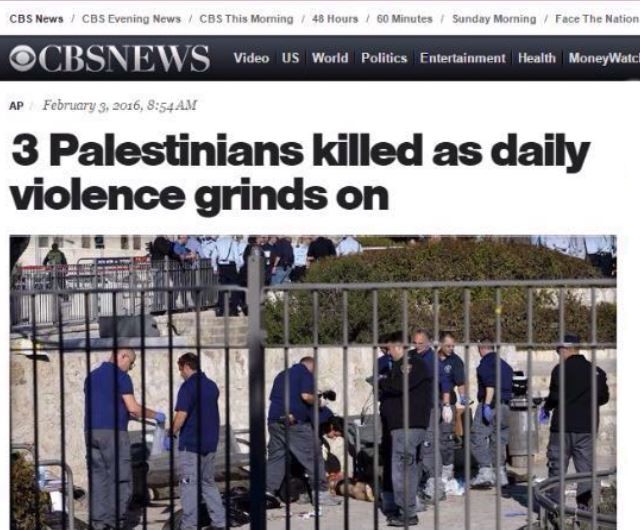 In this case, CBS changed its headline not once, but twice: From: 3 Palestinians killed as daily violence grinds on to: Israeli police kill 3 alleged Palestinian attackers and finally to: Palestinians kill Israeli officer, wound another before being killed
Now is that so hard? Maybe it is. In a 2014 post, Anti-Israel Bias in One Headline (or Three), Jonah Goldberg writes about the AP headline of an article describing how a Palestinian Arab motorist, with a past history of anti-Israel violence, rammed his car into a crowded train station in Jerusalem, killing a three-month-old baby girl and wounding eight people. The headline went from:
Israeli police shoot man in east Jerusalem
to:
Car slams into east Jerusalem train station
to:
Palestinian kills baby at Jerusalem station.
As Goldberg puts it:

So it begins with the villain being the Israeli police. Then, in a nod to fairness, it’s changed to an evil car. Then finally, it’s a murderous Palestinian. It’s progress, I suppose.

Maybe. Of course, the media tactic of blaming Palestinian terrorist attacks on inanimate objects is now a common phenomenon. It’s not clear how far back this kind of manipulation of newspaper headlines has been going on. Writing in 1987, in an attempt to explain The Focus on Israel, Thomas Friedman concentrates more on trying to explain the disproportionate attention paid to Israel than any kind of bias. But when he does address it, he gives an example of when

For their part, Israelis often accuse Western editors of bias, even latent anti-Semitism, for, say, putting the shooting of a West Bank student by Israeli troops on the front page, while burying the shooting of 20 Palestinian students by Jordanian troops inside the paper.

But that is a different kind of subtle bias. If Friedman didn’t think biased headlines were a problem in 1987, 3 years later David Bar-Illan did. Bar-Illan wrote a column for the Jerusalem Post called Eye on the Media. Eventually, he took a collection of his posts from mid-1990 till the end of 1992 and published them in a book: Eye on the Media: A Look At World News Coverage of Israel and the Arab-Israeli Conflict. In his 1990 post Lying With Headlines, he notes

An American study of readers’ habits has concluded that fewer than 30 percent read past the headlines of news stories. More important, the headline colors the story. Even a highly critical review of a play, for example, is perceived as positive if the headline contains the word “successful”; all the aspersions in the body of the review are then regarded as mere cavils. Conversely, a negative sounding headline taints even the most fulsome praise. [emphasis added]

The New York Times recently showed us how right Bar-Illan is on that last point: 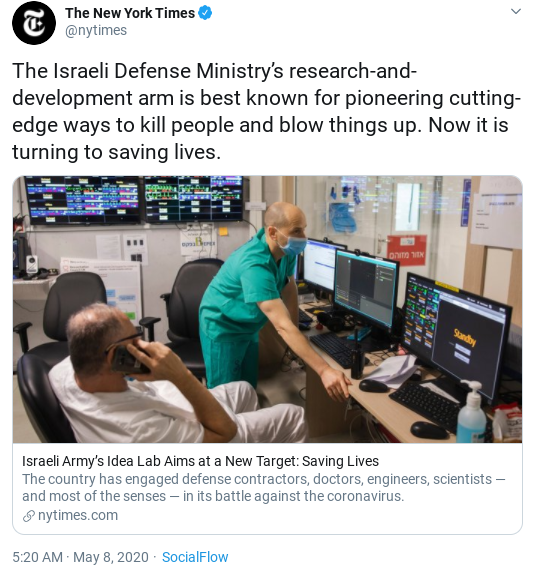 Bar-Illan’s examples are not limited to the printed media either. He writes about then-ABC-TV anchorman Peter Jennings who introduced a news story before a commercial break:

A young Arab was nearly lynched today in Jerusalem.

After the commercial, the viewer learned — assuming he stayed tuned — that “the ‘young Arab’ had stabbed to death two elderly men waiting for a bus, and was then chased, subdued and beaten by passersby.”
He writes about the time London’s The Independent ran a story with the headline “Five Palestinians killed in Israeli beach raid” — the story was about an unsuccessful terrorist raid on a Tel Aviv beach.
Then there is the British Western Mail, which had the headline “Arab knifed in revenge after Israelis are murdered” – but actually the Arab was only lightly injured, after the discovery of the mutilated bodies. Bar-Illan writes, “had the considerations been purely journalistic, no editor would have let the headline lead with this decidedly minor injury, let alone describe it as a ‘knifing’.” He concludes with a comment on the media’s habit — even back in 1990 — to avoid pointing out Palestinian terrorists as perpetrators of attacks:

Followers of news from Israel in the Western press must wonder about this country of unbounded miracles, in which stones are thrown, cars are torched, and Jews are shot, stabbed, and burned to death by some sort of spontaneous process, with the perpetrators unknown.

Clearly, this form of media bias — and anti-Israel media bias in general — is not a 21st-century phenomenon. It has been going on for a while. And the problem goes beyond just bad PR for Israel. Jonathan Tobin asks Does media bias against Israel still matter? and writes that polls indicate that a strong majority of the US still supports Israel — even with all the media bias and distortions.
But it isn’t the effect of this bias on the general population that should be the concern. Keeping in mind how much Israel’s successes, such as the 1976 Entebbe rescue, encouraged Jews and made them feel closer to Israel, Tobin notes that the opposite is also true:

While some Jews are outraged by biased coverage that unfairly depicts Israel as a villain, others internalize the calumnies and distance themselves from the Jewish state. An average consumer of news may not be influenced by the Times. But a not-insignificant portion of American Jewry still regards the newspaper with the sort of veneration that observant Jews have for religious texts. The Times has been assaulting the Jewish community with the prejudices of its publishers, editors and reporters since the days when, as Dermer rightly notes, it “buried” the story of the Holocaust. Media bias may not have turned Americans against Israel, but it has been doing a bang-up job of turning Jews against each other for decades.

This is especially a concern now with the increasing strength of “progressives” in the Democratic party, where antisemitism is only called out when it comes from the extreme right-wing. Ties and support for Israel among young Jews cannot be taken for granted. Now more than ever, especially on social media, it is important to counter the bias and spin that comes from traditional media — and now from the new media as well.