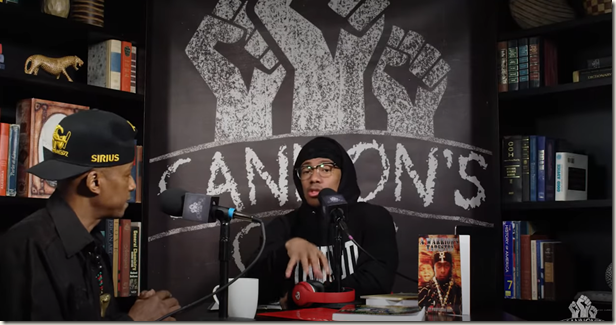 Nick Cannon is an actor, comedian, rapper, director, writer, producer. Most people are familiar with him as being the host on NBC’s America’s Got Talent and Fox’s The Masked Singer.

Two weeks ago, he hosted Professor Griff, who was part of the rap group Public Enemy and had already been known to be antisemitic and anti-gay. In 1988 he said, “If the Palestinians took up arms, went into Israel and killed all the Jews, it’d be alright” and then followed that up with “the majority of them [i.e., Jews]” are responsible for “the majority of the wickedness that goes on across the globe.” He added that “the Jews finance these experiments on AIDS with black people in South Africa,” and that “the Jews have their hands right around Bush’s throat.” He was forced out of Public Enemy after this, and his resentment towards Jews as a result is still there.

The entire show is 90 minutes long, but it includes long stretches of pure Jew-hatred by both Cannon and Griff, punctuated with the insistence that they don’t hate Jews.

In the first, Griff says that blacks cannot be antisemitic because they are the real semites (implying, of course, that Jews are fakers.) Then Griff says that “they” drove him out of his group.

The second clip is a conversation where Griff says that Jews have taken the Black people’s birthright and are now scared because Jews know that Blacks know that they are fakes. Cannon then clarifies that, yes, they are really talking about  the Rothschild and Illuminati families and global corporations that are trying to silence Blacks for being the people that these white Jews and others want to be.

Griff then goes on to compare this supposed theft of identity to someone who steals the bicycle of another, and then the victim comes back to claim their bike. So that’s why “they” silence Michael Jackson when he sang, “Jew me, sue me, everybody do me/ Kick me, kike me, don’t you black or white me” and when Puff Daddy wrote in “All About the Benjamins”, “You should do what we do, stack chips like Hebrews.”

The next clip shows Cannon go on a truly racist screed saying that white people are naturally savage because they lack melanin. He says that “they” have to rob, steal, and rape in order to survive. He then clarifies that when he says “they” he is referring to “Jewish people, white people, Europeans, the Illuminati.”

Both of them are reverent towards Louis Farrakhan,  and Griff seems to be a follower of the Nation of Islam while Cannon is merely a fan.

The video already has 250,000 views on YouTube and who knows how many watched it or listened to it as a podcast.

The week before, Cannon highlighted this part of his show where another guest, also a Nation of Islam follower,  absurdly claimed that the US gives Israel $80 billion a year as Holocaust reparations.

This is crazy conspiracy theory nonsense that is accepted as mainstream thinking among many Blacks – with very little pushback.  And these kinds of antisemitic conspiracy theories are what prompted the Jersey City shootings.

Nation of Islam-fueled antisemitism is a major problem in the Black community, and too many people are too frightened to push back against it for fear of being labeled racists. As we see from this video, when there is pushback, the Black community to often considers that to be proof of Jewish power rather than a legitimate objection to Jew-hatred. The result? More Jew-hate.

But if you are against bigotry, you should be against all bigotry. It does no credit for people who claim to be anti-racists to condone antisemitism, and we have seen too much of that happening.