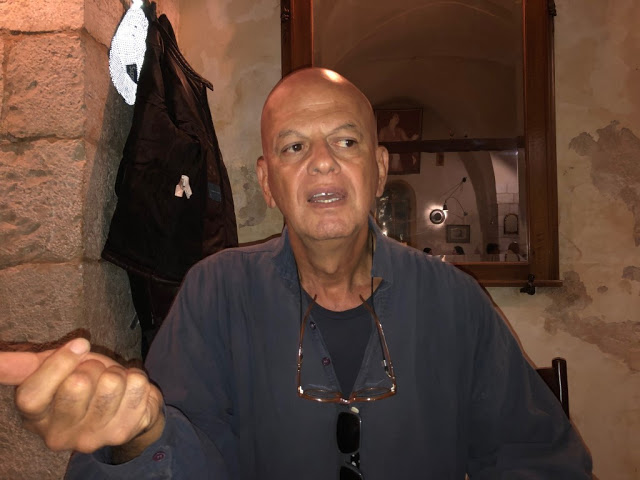 Dahir Zidani, the owner of the Al Reda restaurant that has been in the news for not allowing patrons to speak Hebrew to his staff, is probably a bigot – but he is definitely a jerk.

He was interviewed by QudsN where he said that part of the reason that he bans Hebrew from being spoken is to push Arabic as a language of choice for Arabs like his workers, but the major reason is that Israelis are “barbaric:”


There is another issue, one that Israelis may understand better than others, because they know themselves, that they are insolent and messy, they are loud and boastful, they enter the restaurant arrogantly and in a condescending way, and we found that this way we could restrain them. The moment we speak to them in English, they become different people, they lower their voices, they speak politely, they behave nicer and they are more civilized, not as much as we would like them to be, but less barbaric than they were beforehand.

He also makes it cler that he doesn’t consider himself an Israeli:

Can an Israeli impose his conditions and mood on a restaurant in France or in Africa or ask them to bill the account in Hebrew ?! of course not. So I submit the invoice in Arabic, and if someone wants to explain the details of the invoice, I am of course ready, but I provide it in Arabic.

The striking thing about the interview though is that Zidani has a vision for the relationship between a restaurant owner and the customers that is not exactly how most businesses are run:

This place is open to all people, but it is my place. Another point of view is who should determine the conditions of hospitality, is it the guest or the host ?! Or is this guest expecting that he can impose his conditions elsewhere as he tries to do with us ?! Or is this a reflection of the balance of power ?!

“The customer is always right” is not this guy’s slogan. This is very clear when he or his manager respond to criticism on TripAdvisor:


The place seems to be strict about rules. We left with uncomfortable feeling that they had something against us and we got no reasonable explanation why we couldn’t get our order. Try sodfeh or tashreen in the neighborhood. Time was midnight, place half empty , 4 of us, sat further away from smokers. Apparently our table was only for 3 people. Ordered drinks only. Waiter retuned explained take only for 3. We said we want to be close to window and further from smokers. 10 minutes another waiter came that the table can’t hold food for 4, we explained we ordered only drinks. 10 minutes later same waiter came back and explained no way you stay on this take , we left wasting half an hour and perplexed about the true reason why we couldn’t get our order.

Dear Mr Zipzib
you don’t like smoke and smokers , you entered a smoker’s place , !!!
you decided and insisted to take a table we did not give you !!! without respecting our rules and consideration !!!!
you can insist also not to understand why we did not and could not serve you under your conditions !
still I hope you can understand this : A table should not look comfortable only for client , it should be comfortable also for the next tables , it should be comfortable for the waiter to serve and it should be safe , safe , safe for clients !!!!
we would have explain that to you if you did move to the available alternative tables !
you exempted your self from thinking or worrying about these considerations , we cannot and we don’t want to take this exemption to ourselves !!! we simply still have some respect to ourselves and to our place !!
hope you will reconsider you review !!!!??

The manager of this establishment was the rudest, most offensive and angry person I have come across in any so called restaurant.
If it had been my choice I would have immediately left.
The group I was part of were made to feel unwelcome, unruly (!) and unwanted.
The manager, or whoever was representing this business , was contemptuous and positively abusive in my honest opinion and showed our group not even the most basic respect never mind any remote shred of ‘hospitality’ whatsoever.
To list :initially a refusal to acknowledge the booking denying it existed
Negative attitude towards size of our group
Refusal to take orders instead offering ‘shared plates’ that did not take much account of vegetarian or vegan needs
Slamming down menus in front of us
Telling us to split into smaller tables because we were too loud..!!
Refusing to turn music down
Keeping people waiting interminally for drinks and food
Just plain nasty
There was obviously some deep seated resentment towards us that I could only guess at.
This person looked unclean,disheveled;
The place itself was dark, extremely dusty and practically empty apart from single men and one very young inappropriately dressed girl.
How I deeply deeply resented giving even one shekel of hard earned money to this company.
NO STARS
AVOID AVOID AVOID

DAZEI, General Manager at Alreda, responded to this review
This review ( second of the same grope ) does not deserve any kind of respond !!
I am so sorry I agreed to feed them , and I am most happy they and their friends promise to avoid my place !!!

The restaurant has no problem putting a Hebrew sign on its front. It is a warning that it is protected by a security system. 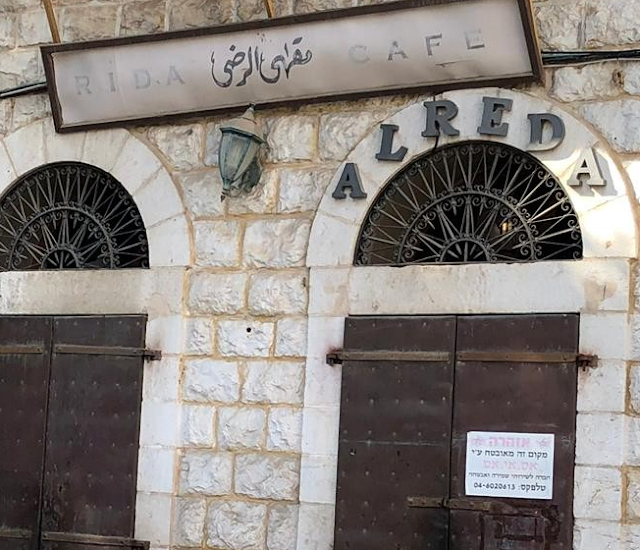 Apparently he considers thieves to be Hebrew speakers.