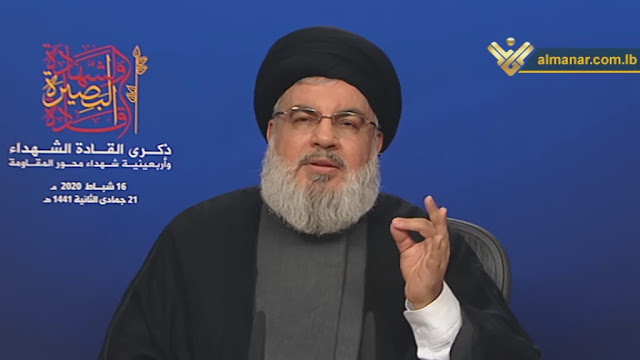 Hassan Nasrallah gave a speech Sunday where, among other ramblings, he discussed how Hezbollah will deal with the United States. (The translation comes from Hezbollah’s Al Manar website.)

Sayyed Nasrallah stressed that those two crimes had ushered a direct confrontation with the axis of resistance in Lebanon, calling for forming a comprehensive (political, economical, cultural and legal) resistance front,  against the United States all over the world.

The military choice will never be abandoned, according to the Resistance Leader who pointed out that the US tyrant has not left [anything] for the regional peoples except holding guns to fight it.

That last paragraph sounds like a terrorism threat, but he left it vague.

Sayyed Nasrallah considered that the confrontation between the United States and the forces which reject to surrender to its will is inevitable, adding that Washington is who has led the region to this conflict, not the resistance.

All the regional peoples must be prepared for the key confrontation, according to Sayyed Nasrallah who added that Trump’s administration is the most arrogant, unjust, Satanic and corrupt in the US history.

The US hit the quadfecta!

But here’s the best part:


Hezbollah Chief suggested boycotting all the US goods or at least the products of some (e.g. Trump’s) firms, adding that the US point of weakness is its economy.

What, exactly, does Hezbollah purchase from Trump’s companies today? Do they stay in Trump hotels? Do they buy apartments in Trump buildings?

This is some strategy.

Nasrallah then gave a backhanded compliment to Israel while trying to insult it and the US:


“The Israeli enemy has a major weakness which is the human losses; similarly, the Americans have their economic and financial situation as a point of fragility.  Hezbollah hit the Israeli enemy at its weakness, so, likewise, we can concentrate on the US economic interests.”

Those crazy Jews and their concern for human life! We in Hezbollah have no such weakness.