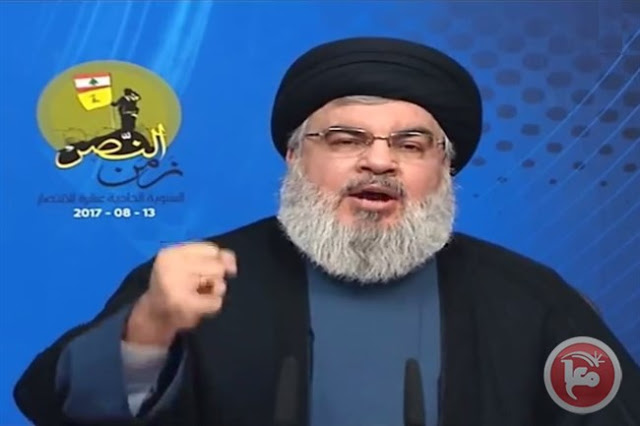 Hezbollah leader Hassan Nasrallah mad one of his long, meandering, threatening  speeches about how powerful Hezbollah is and how weak Israel is on the 11th anniversary of the end of the Second Lebanon War.

He obliquely threatened to shoot rockets at Israel’s Dimona nuclear reactor, as he bragged that Israel closed down the ammonia tanks in Haifa after a previous threat.

As usual, the brave leader issued his speech by video instead of in front of his fans, out of fear that a Hezbollah spy for Israel would assassinate him.

But one point he made that I didn’t see in the English reports that is worth mentioning.

Last month, President Trump met with Lebanese prime minister Hariri where he praised Lebanon’s role in the fight against terror. Trump said, “The Prime Minister and I have just concluded an extensive conversation about the challenges and opportunities facing Lebanon and its neighbors.  Lebanon is on the front lines in the fight against ISIS, Al Qaeda, and Hizballah. “

Nasrallah said, “The words of Trump that his country and Lebanon are partners in the war on terror reflects his political ignorance because Hezbollah is a partner of the [Lebanese] government.”

In this case, Nasrallah is correct. To claim that Lebanon is fighting against Hezbollah is indeed ignorant – the Lebanese army ignores and even sometimes partners with the more powerful Hezbollah in the south.

Trump’s words indeed were naive. the Lebanese government as it stands now is part of the problem, not the solution.