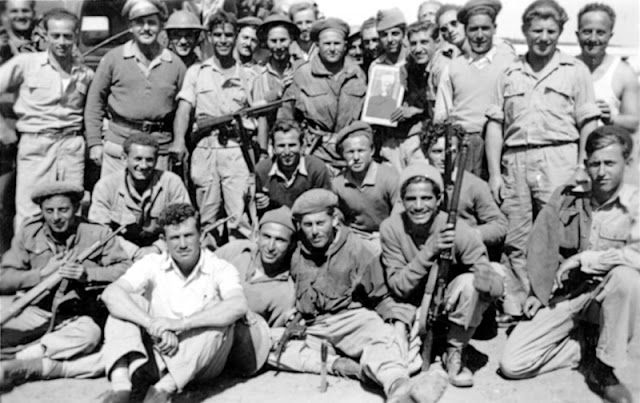 Most of the Arabs who fled their homes in 1948 left out of fear of war, before they saw a single Zionist soldier. Even the New Wave historians agree that the waves of Arab flight until June 1948 were prompted by fear of war and that there were no expulsions at that point.

The interesting thing is that the first wave of those leaving, in December 1947 and January 1948, were the wealthy; many of the leaders left by June. The entire social structure of Arabs in Palestine collapsed, and as the Arab people saw their leaders abandon them, they left as well.


According to Efraim Karsh in April 1948 “some 100,000 Palestinians, mostly from the main urban centres of Jaffa, Haifa, and Jerusalem and from villages in the coastal plain, had gone. Within a month those numbers had nearly doubled; and by early June, … some 390,000 Palestinians had left.”30,000 Arabs, mostly intellectuals and members of the social elite, had fled Palestine in the months following the approval of the partition plan, undermining the social infrastructure of Palestine. A 10 May 1948 Time magazine article states: “Said one British official in Jerusalem last week: ‘The whole effendi class has gone. It is remarkable how many of the younger ones are suddenly deciding that this might be a good time to resume their studies at Oxford….'”

Although the question seems rhetorical, it should be asked: Why did the Arab social structure disappear in anticipation of fighting, and the Jewish one stayed intact? Jews were certainly fearful, and the ones captured by Arabs were shown no mercy, as Joseph Schechtman wrote:

Arab warfare against the Jews in Palestine … had always been marked by indiscriminate killing, mutilating, raping, looting and pillaging. This 1947–48 attack on the Jewish community was more savage than ever. Until the Arab armies invaded Israel on the very day of its birth, May 15, 1948, no quarter whatsoever had ever been given to a Jew who fell into Arab hands. Wounded and dead alike were mutilated. Every member of the Jewish community was regarded as an enemy to be mercilessly destroyed.

Yet the Jews stayed and the Arab leaders fled. Why?

The obvious reason is that the Jews had no place to go. Israel was their home and its neighbors would murder them. They had no choice.

Arabs had a choice. Many of the Arab families had not been in Palestine for more than a century, and practically all the Muslim Arabs could trace their family history showing their travels throughout the Middle East from their origins in Arabia or Yemen or Egypt. The idea of separate Arab nations was still new – the Ottoman Empire controlled the entire Middle East until the end of World War I, only three decades earlier – and Arabs considered the entire region to be their home, not “Palestine.” Palestine was just another Arab region to them and their ties were not that strong.

On the other hand, they made an assumption that they can migrate to other Arab countries without a problem. Who could have anticipated that they would not be able to integrate into the lands of their fellow Arabs? The idea that they would be stateless for decades to come was simply inconceivable.

Jews had no options. Jews had to fight for their land, or die trying. Even though most of the Jews were recent immigrants, their psychological ties to Eretz Yisrael were far stronger than those of the Arabs of Palestine whose leaders fled at the first sign of trouble.

In a sense, 1948 was a test to see which population wanted the land the most.

There is a reason that most of the Arab fighters were not from Palestine. The idea of a huge victory, the romantic notion of defeating and massacring the Jews, was strong in the Muslim world and attracted adventurers and jihadists. But the actual Arab residents of the land just wanted to live their lives as Arabs – not as Palestinians, which none of them identified as, but as Arabs – anywhere. The ones who fought the Jews defended their own villages and towns, but had no interest in defending a “Palestine” that they never identified with.

Some Arab nations were incensed that the men of Palestine fled to them and the refugees had to be forced to go back to fight.

In the end, the Arab ties to their supposed homeland was far weaker than that of the “colonial” Jews. The victors were the ones who wanted the land more.