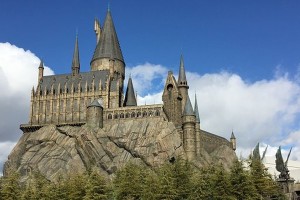 Hogsmeade, July 26 – Flush with a sense of power and purpose after extracting concessions elsewhere, Muslims issued new demands today that the headmaster of Hogwarts School of Witchcraft and Wizardry take away the hexes, jinxes, and other measures around the institution intended to protect the students, faculty, and staff.
The Islamic Waqf and the Islamic Movement issued an ultimatum to Albus Dumbledore, warning him that they would continue their protests until all access points to the school grounds are no longer bewitched. They further admonished their followers that spells cast by a Muslim who has passed through any such measures will not be accepted.
“The disgraceful anti-muggle enchantments are an affront to Islam,” they declared. “The infidels must remove any such abominations before we will deign to enter the compound once more. We demand that the status quo be restored to before there were any such enchantments. Muslims everywhere are watching and waiting for compliance with this.”
No reaction has come yet from the office of the headmaster, but several staff members have spoken off the record about the situation. “They may demand as they wish,” sniffed a dark-haired professor with a prominent nose. “The day this institution trifles with such trivialities as what muggles want is the day I tender my resignation.”
“Well, tha’s a tricky bi’ innit?” remarked another staff member, of unusual size. “I reckon they’re harmless. Ca’t be too careful, though, and whatever Dumbledore decides, well, tha’ll be good ’nuff f’ me.”
“Oh, I would love to see them try getting in, even without the enchantments!” gushed a portly professor. “Some of the students here would make quick work of them. Why, there’s one fifth-year redhead who does the most amazing bat-bogey hex. Almost a shame we can’t let her loose on that lot. We also have a sixth-year with such a talent for potions that he must have inherited his mother’s facility with the field. Say, the two would make quite a couple, now that I mention it. Wonder if anyone else has noticed that possibility. “
“This does not bode well, not at all,” moaned a thin professor with flowing robes. “Everyone here is in grave danger! Just look at the alignment of the stars – it is an omen, I tell you! When you are gifted with Sight, as I am, you, too, might perceive the secrets the future has in store.” She floated away, peering at her crystal ball.
Reports from the Ministry of Magic indicated that Minister Fudge was leaning toward accepting the Muslims’ demands.