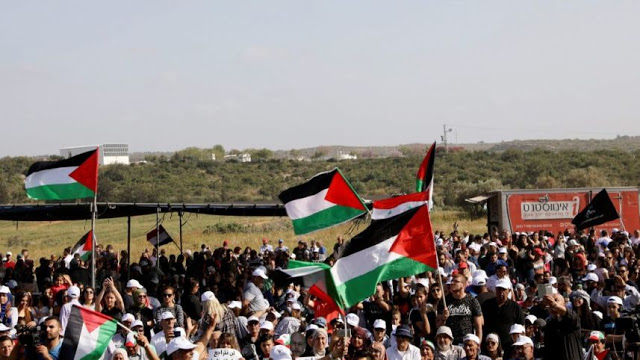 
Thousands of Israeli Arabs marched in northern Israel on Tuesday, commemorating the Nakba, or “catastrophe,” when more than 700,000 Arabs fled or were expelled from their homes during the 1947-49 Israeli War of Independence.

The march also followed a dispute with the police over the timing and location. The police protested the scheduling − the same day as Israeli Independence Day − saying they could not secure two enormous events on the same day.

They had also received complaints that the Nakba march would pass a memorial to Israeli war dead from the Yechiam convoy, which delivered supplies to a beleaguered kibbutz during the war. In the end, a compromise kept the march on Independence Day but changed its path.

Wakim Wakim, chairman of the Association for the Defense of the Rights of the Internally Displaced, said the message to the Israeli government was “your Independence Day is our Nakba Day, and this independence led to the destruction of 532 Palestinian villages.”
“They gambled on the old dying and the young forgetting,” Wakim said. “But the young are leading the march today and making a new, clear statement that the right of return is a fundamental right for the displaced and refugee Palestinians.”

These Arabs specifically chose to protest on Israel’s Independence Day, which goes according to the Hebrew calendar. The one and only reason is to position it not as a day of memory or sorrow but a day of protest at Israel’s very existence, specifically on Israel’s day of independence, no matter what day of the Gregorian calendar it comes out on.

And the organizer says quite plainly that he wants to destroy Israel by not only having the fake refugees “return” but by also having the Israeli Arabs “return” to the exact spots that their great-grandparents lived.

Especially if Jews live there now.

It isn’t about independence. It isn’t even about “return.” It is all about uprooting Jews from the Middle East.

All the rest is a smokescreen.