Lebanon is generally considered one of he most liberal Arab countries.

That’s not saying much.

While Article 13 of Lebanon’s constitution says:

It turns out this is not really true.

Lebanon’s penal code has a bunch of penalties for defamation, slander and similar offenses.

Moreover, Article 157 of the Military Justice Code prohibits defamation of the army.

The truth is not a defense against these charges.

In recent months, these laws have been invoked more and more often as Lebanese have been protesting the government. One crazy example:


When banks started to issue withdrawal limits weeks before the revolution, people took videos and photos at the banks and posted them on social media.

Among them, Lebanese journalist Amer Shibani who, according to Middle-East Eye on October 15th, was threatened by a lawyer of a major bank, “You will delete your tweet or else.”

According to journalist twitter user @chehayebk, “Several were interrogated over accusations of slander and defamation,” just for posting photos of the banks.

In other words, anything that someone doesn’t like can become a target for a “defamation” action.

Lebanon is enforcing online “defamation” as cybercrime. The Lebanese Cybercrimes Bureau  reportedly initiated 3,599 defamation investigations between January 2015 and May 2019 and the number is increasing.

This journalist deleted a tweet saying a certain bank stopped handing out dollars after he was summoned by the Cybercrimes Bureau.

In October,  a group of lawyers accused the British magazine The Economist of damaging Lebanon’s reputation, economic well-being and desecrating the country’s flag because it illustrated an article about Lebanon’s floundering economy with this picture: 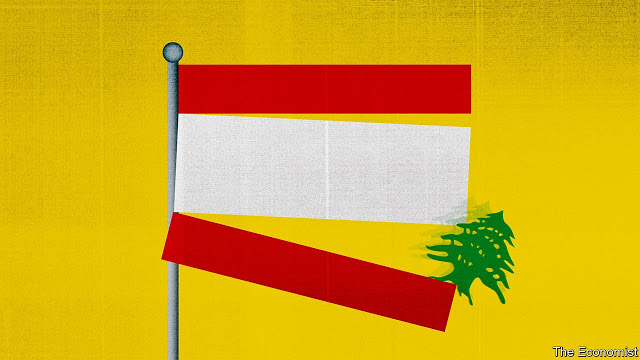 While HRW is actually on top of this story, the media has been remarkably silent – especially given that the media is the target of much of these laws.