Recently, another set of the usual Jewish leftist academics and no-name students signed a petition against Trump’s handling providing funds to Duke/UNC after it had an anti-Israel conference.

This is no big deal. But +972 Magazine’s coverage of the story mentioned some prominent names that signed the petition:

Who is Molly Crabapple, whom +972 puts on the same pedestal as the discredited Judith Butler and Noam Chomsky?

Well, although she has tried to erase her many tweets about the topic, Crabapple was a huge fan of a neo-Nazi known as “Weev.” 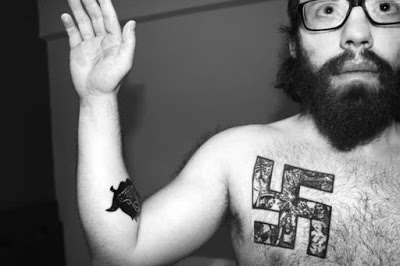 As documented in this Medium article about Crabapple’s relationship with Weev:


Weev is a self-professed admirer of Hitler, and currently serves as the webmaster/IT guy for The Daily Stormer, a neo-Nazi website. He has bragged about faxing threats to kill Jewish children to synagogues. (There are 28 total mentions of the alias “Weev” on The Southern Poverty Law Center’s website, filled under the sections “Hatewatch” and “Extremist Profile.”) He waged a targeted harassment campaign against a prominent woman programmer, taunting her and her family with rape and violence threats until she was scared to go out in public. He tried to organize people to crash the funeral of Heather Heyer. He has a large swastika tattoo on his chest.

A few years ago, Quinn Norton lost her job at the New York Times partially because of her friendship with Weev. But for some reason, Molly Crabapple’s friendship with him hasn’t turned the Left – or Leftist Jews – against her.

Crabapple wrote an article about his trial where he was accused of hacking AT&T. The merits of the case are not so clear; he really didn’t hack AT&T. But Crabapple’s care about Weev went way beyond her support for his civil rights and to her admiration of him as a person, as she wrote in an article for Vice:

On the morning of March 18, I was sitting with friends at the Federal Courthouse in Newark, waiting to hear how long Weev would spend in jail.

I didn’t go there to write an article. I went because his conviction was wrong, and my friends and I cared for him. I meant to be another body filling the courtroom, to provide whatever support that’s good for.

…While he’s instantly likeable in person, he’s done things that have offended.

…One after the other, his friends embraced him, warm and hard. Official internet asshole or not, Weev inspires ride-or-die love.

…Weev tried to touch his tablet. Suddenly, giants in hoodies pounced on him. Weev is small. Their huge backs walled him off. They pounded his head into the table, cuffed him, and dragged him from the room. Weev’s friends sprang to their feet. This is the cruel trick of seeing a loved one handcuffed. You want to protect them. You can’t. A black-haired girl from last night’s party balled up in tears.

Molly Crabapple was practically in love with a proud neo-Nazi with a swastika tattooed on his chest.

And today she is considered a leading light of the Left, to the extent that she is name-checked by +972 to be in the same category as Butler and Chomsky.

Since people started pointing out Crabapple’s entirely inappropriate love for her Nazi friend, she had been furiously removing all her loving tweets to Weev, and now claims that she never liked him. But she can’t erase this love-letter to the bigot and misogynist.

Crabapple has signed other anti-Israel  and pro-BDS petitions. Jewish Voice for Peace happily gets her signature when they need it. She reliably shows up when anti-Israel groups ask her to.

The question is, why the Left is so quick to excuse one of their own who embraced a far-right asshole?