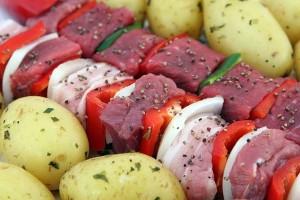 Beirut, June 7 – Community leaders among those who consume human flesh in a moderate fashion complain that they are being unfairly targeted by critics of the practice who lump them together with more radical perpetrators.
Moderate cannibals face unjust pressure from politicians, the media, and advocacy groups, the leaders contend, even though the ideology of the moderate cannibals in no way supports the activities of extreme cannibals. At a joint press conference of several cannibal community organizations, the spokespeople for the groups called on the public to distinguish between them and extreme cannibals, or risk alienating the moderates and driving them into the arms of the extreme followers of the practice.
A coalition of grassroots cannibal groups called the Federation of Levantine Eaters of Succulent Humans (FLESH) assembled the press conference this afternoon and called on the news media, especially in the West, not to paint all cannibals with the same broad brush.
“It is irresponsible at best, and outright destructive at worst, to group all cannibals together,” insisted Waleed Aniwan, head of the Khaneh-Ümraniye “Recycling” Union (KURU), which brings together moderate cannibals from Iran and Turkey, where the cities of Khaneh and Ümraniye, respectively, are located. “Our doctrines and practices have nothing to do with the barbaric crimes committed by extremist cannibals. In fact we deny that what those monsters are doing is cannibalism at all.”
Other speakers stressed the responsibility of the media to convey to the world at large the great diversity among cannibals. “Journalists and commentators in particular must take care not to portray the heinous acts of the extremists as reflecting on the vast majority of peaceful cannibals,” explained Soylent Green, a volunteer with FLESH. “And of course it could not hurt objectivity and balance to provide some attention to the grievances the extreme cannibals may have that lead to this sort of behavior.”
Critics noted that the press conference and similar events represent an effort to absolve moderate cannibals of responsibility for the extremist behavior inherent to the lifestyle. “It is disingenuous to claim the heinous acts of extreme cannibals have nothing to do with cannibalism,” argued Donner Parti, a vocal opponent of cannibalism. “The same groups that produce the so-called moderates end up producing the extremists as well, and there has to be a much more prominent, sincere, and sustained campaign by these so-called ‘moderate’ cannibals to dissociate from the extremists. The whole denial and abrogation of responsibility is a little too much to swallow.”