From The Independent last week: 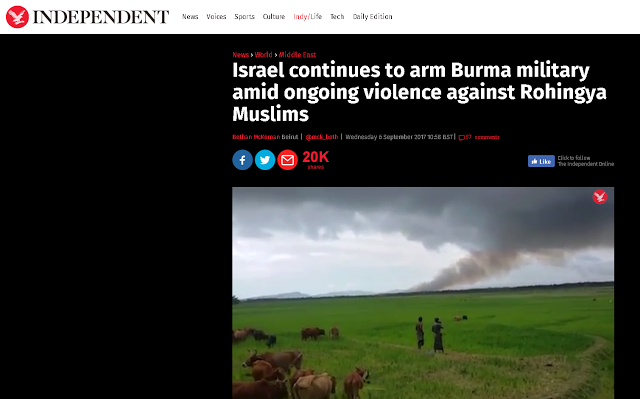 Israel is under fire from human rights groups for the continued sale of weaponry to the Burmese junta after intensified violence against the country’s Rohingya Muslim minority.
More than 100 tanks, as well as boats and light weapons, have been sold to the Burmese government by Israeli arms companies, investigations by several rights watchdogs have found.
One company, TAR Ideal Concepts, has also trained Burmese special forces in northern Rakhine state, where much of the violence is taking place, posting pictures on their website of its staff teaching combat tactics and how to handle weapons.
An army crackdown triggered by an attack on 25 August by Rohingya insurgents on Burma security forces has triggered a major humanitarian crisis. At least 400 people have been killed and nearly 125,000 Rohingya have fled to neighbouring Bangladesh.

Similar articles in Haaretz and Middle East Eye  make it sound like Israel has a huge trade with Myanmar/Burma and imply that Israel is it’s major supplier of arms, especially arms being used against the Muslims there.

This is a all a lie.

Here’s the chart from SIPRI that details the amount, in millions (of dollars, I believe) for the past seven years.

Israel provides about 1% of all arms to Myanmar since 2010, and nothing recorded since 2011! There are some reports of some more recent purchases than mentioned in this report, but they are small – a patrol boat, some specialized rifles.

Somehow, French and German arms dealers managed to sell arms to Myanmar far more recently, more than Israel did, and yet no one is reporting on that. And EU countries are officially banned from doing exactly that! Apparently, that is not very newsworthy.

I’m not justifying even Israel’s tiny number of sales, of course. But while it may be true that Israeli arms manufacturers will sell weapons to unsavory nation-states (which is what every arms dealer in the world does subject to local laws) the emphasis on only Israel  in reference to the current massacres there is proof not of Israel’s evil but of the media’s utter anti-Israel bias.
And those 100 tanks? Oh, they were sold in 2005!
The story isn’t Israel’s actions. The real story is why, yet again, Israel is singled out and its actions are amplified totally out of proportion to reality.  The incredible bias by the media and NGOs to blow up Israel’s role and ignore any context whatsoever is more shameful than Israel’s actual actions – because by ignoring the actual sources of arms that are being used to murder the innocent, the media is exculpating them.