It has been a week now since Trump’s announcement last Wednesday that the US recognizes Jerusalem as the capital of Israel.

You might have expected the media to present a biased, distorted view both of what Trump was actually doing and of what followed, considering how highly charged the issue of Jerusalem is.

If so, you were not disappointed.

Here, in no particular order, are some of the examples of what the media reported.


Ever since his election in 2005, Mr Abbas has rejected violence and called upon his people to pursue statehood through diplomacy. Now the calls from within the Palestinian national movement for a return to intifada, ie, a violent uprising, are growing.

Does The Economist really have that short a memory?

UK Media Watch also points to an article in The Telegraph, which pulls out all the stops:


For more than 20 years, Saeb Erekat, the Palestinian’s chief peace negotiator, has chased the dream of a two-state solution and the hope of an independent Palestinian state.

He followed it to the White House under four different US presidents, haggled over it in secret and public negotiations with hard faced Israeli negotiators, and defended it against sceptical Palestinians on the streets of Jericho.

But in the minutes after Donald Trump’s announcement that the US was recognising Jerusalem as Israel’s capital, Mr Erekat stood in front of the television cameras and concluded that his dream of two decades was finally dead.

“Unfortunately, President Trump just destroyed any possibility of two states,” he said in a quivering voice.

Left out is that Erekat was the chief negotiator in both 2001 and 2008 when the Palestinian Arabs rejected Israeli peace offers.

The other point, of course, is that Trump deliberately made a point of not taking a position on “specific boundaries of the Israeli sovereignty in Jerusalem.” He left that open to negotiations, no doubt as soon as Erekat regains his composure.

Honest Reporting came up with a number of “Media Muckups.” The Daily Mail scored a hat trick, incorrectly describing Judaism, Islam and Christianity, before making the necessary corrections.

Here is the Honest Reporting snapshot of the original reporting before it was corrected: 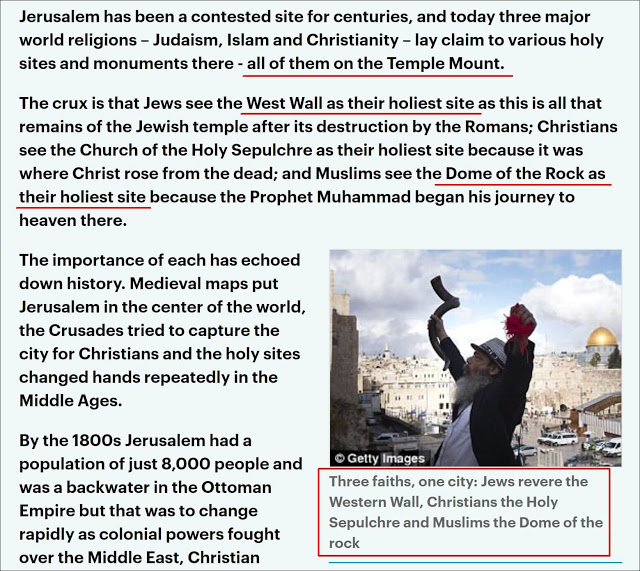 And here are the errors HonestReporting pointed out:

A followup article of “More Media Muckups”, included a novel interpretation of the status of Jerusalem and Tel Aviv by The History Channel that has since been fixed:

CAMERA notes that New York Times Downplays Judaism’s Ties to Jerusalem, when it claims Jerusalem is not so important to Israel after all:


“It was for the British that Jerusalem was so important – they are the ones who established Jerusalem as a capital,” said Prof. Yehoshua Ben-Arieh, a historical geographer at Hebrew University. “Before, it was not anyone’s capital since the times of the First and Second Temples.”

Of course, a capital would only be important to a country — a fact that puts the quote in context, while raising the question that since Jerusalem has never been the capital of a Muslim country, why do Palestinian Arabs suddenly want Jerusalem now. The article leaves out the close ties Jews in the Diaspora have had with Jerusalem and the fact they became a majority in Jerusalem towards the latter part of the 1800’s.

Another CAMERA article points to an error by The New York Times’ Max Fisher. In his article, Fisher gets the history wrong:


Both Israelis and Palestinians claim the city as their political capital and as a sacred religious site. Israel controls the entirety of the city. Any peace deal would need to resolve that.

The city’s status has been disputed, at least officially, since the 1948 Arab-Israeli War. Before that, the United Nations had designated Jerusalem as a special international zone. During the war, Israel seized the city’s western half. It seized the eastern half during the next Arab-Israeli war, in 1967.

Actually, when the UN General Assembly passed Resolution 181 in 1947 in favor of the partition of the land between a Jewish and Arab state, the resolution would make Jerusalem into a “corpus separatum” under UN trusteeship for up to 10 years. But as a General Assembly resolution, it was only a suggestion, not binding and definitely not an official designation of any kind. The Jews accepted it but the Arabs rejected it and attacked after the British left. And that was the end of that.

Social media also pointed out examples of when the media messed up:

This passage in today’s @nytimes editorial is stunningly cynical: “East Jerusalem was exclusively Arab in 1967.” It was indeed exclusively Arab. Because 19 years earlier, Jews, long a plurality in the area, were forced out.

The Swedish reaction to #Trumpjerusalem announcement is odd,calling it a “catastrophe” and “dangerous”,as #Sweden unilaterally recognized #Palestine 4 years ago and called it a “step toward peace”.Why the double standard from Swedish FM @margotwallstrom ? #JerusalemEmbassy

Key detail: Palestinian violence isn’t spontaneous and organic, as western media presents it. It’s orchestrated & controlled by the PA and Fatah as a form of political blackmail. And Trump refused to be blackmailed. https://t.co/6Ghnoxm6gs pic.twitter.com/4yisQSTPeS

Of course, we have seen another error made by the media across the board, namely predicting major violence as predicted (threatened) by the Palestinian Arabs.

On that issue, Mitchell Bard writes:

After decades of threats intimidated Trump’s predecessors and other world leaders to pretend Jerusalem is not Israel’s capital or face violent consequences, it turned out the blackmailers were bluffing. Even the Palestinians couldn’t manage much fury during the three days of rage declared by Mahmoud Abbas. Sure, there were a few demonstrations, but most seemed to be orchestrated for the benefit of journalists who flocked to the area in hope of a conflagration. The demonstrations in Jerusalem were more severe after Israel installed metal detectors at the entrance of the Temple Mount than they were after the U.S. announcement.

The press has already moved on to other issues after the disappointing lack of bloodshed, but there should be a reckoning for all the supposed experts and officials who predicted an apocalypse.

When all is said and done, what happened?
Why the vast range of media mistakes on the facts surrounding Trump’s announcement, the history of Jerusalem and the predictions about the fallout?

Matti Friedman has written extensively on media bias, as an insider in the media. He has written about What the Media Gets Wrong About Israel, about an alliance of forces that focus on Israel:


This alliance consists of activists and international staffers from the UN and the NGOs; the Western diplomatic corps, particularly in East Jerusalem; and foreign reporters. (There is also a local component, consisting of a small number of Israeli human-rights activists who are themselves largely funded by European governments, and Palestinian staffers from the Palestinian Authority, the NGOs, and the UN.)

That bias accounts for some of the media misrepresentation of events.
There may be another.

Last year, Khaled Abu Toameh wrote that in addition to bias, there is an issue of Western media ignorance as well.

He relates stories about


But when it comes to covering the Israeli-Palestinian conflict, ignorance apparently is bliss. Misconceptions about what goes on here plague the international media. The binary good guy/bad guy designation tops the list. Someone has to be the good guy (the Palestinians are assigned that job) and someone has to be the bad guy (the Israelis get that one). And everything gets refracted through that prism.

Apparently, the media bias against Trump, the already existing anti-Israel bias and the ignorance of some in the media has resulted in a perfect storm of horrendously inaccurate stories.

And it has only been one week.